Triton with a nautilus shell 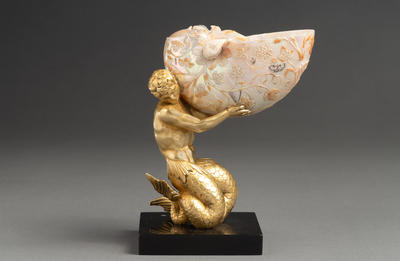 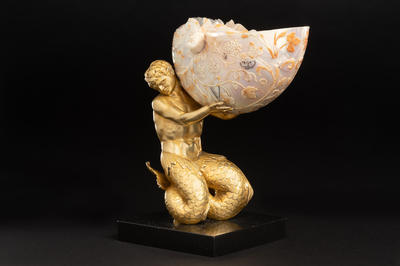 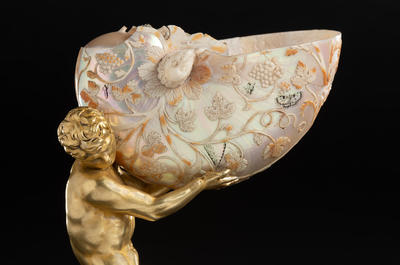 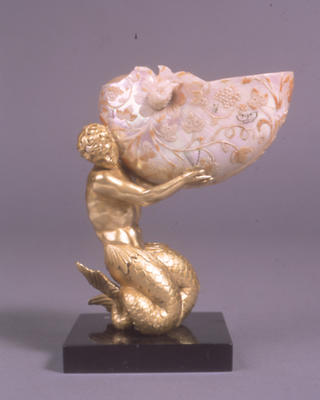 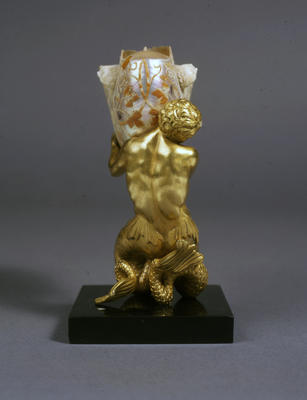 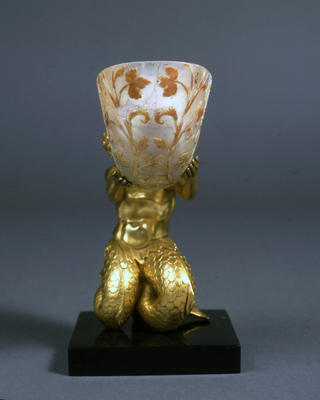 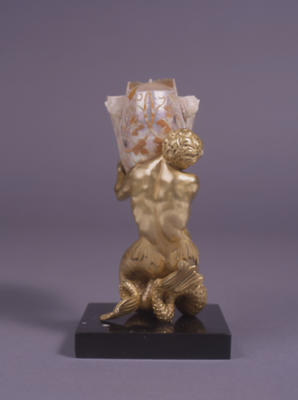 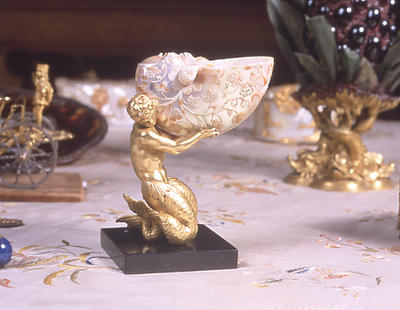 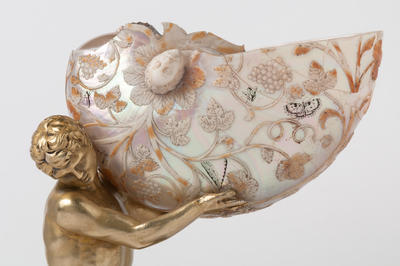 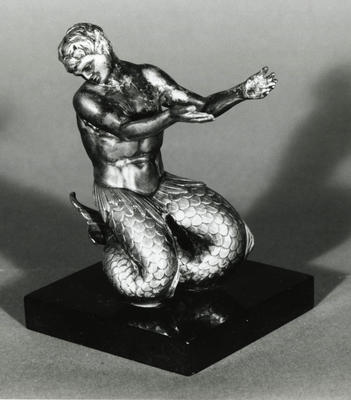 triton and base possibly by Rundell, Bridge and Rundell

A silver-gilt statuette of a Triton, kneeling on his fish tails and with his hands held out to support a Nautilus shell. The shell is carved with grapevines, butterflies, ladybirds, moths and flies, some details highlighted in black, possibly with ink. Set on a square black marble plinth.

Once part of the renowned collection of William Beckford (1760-1844), this triton supporting an exquisitely carved nautilus shell was re-discovered in 2000 by one of Waddesdon’s curators. In 1844, Willes Maddox included the shell in a still life. Maddox's painting enabled the identification of the triton and the separated and badly damaged shell in Waddesdon’s store, and prompted their restoration.

It is not known when the shell was damaged and became separated from its support. It was acquired by Baron Ferdinand de Rothschild and displayed in the Morning Room sometime before 1898. On a table covered with an antique silk cloth, the triton stood alongside other curiosities including a fruit made of amethysts and jade and an automaton of a carriage. Ulrich Leben recreated this display for his 2003 article (p. 116).

Ferdinand owned four other nautilus shells which he displayed amongst his Renaissance treasures in the Smoking Room. In the early 1890s, this space was built as a showcase for the Baron’s collection of treasures displayed in the ‘schatzkammer’ tradition. The shells displayed here were much more elaborately carved and mounted. They were bequeathed to the British Museum along with the majority of the Smoking Room objects at Ferdinand’s death (inv. nos WB.114, WB.115, WB.116, WB.11). It may be that the more modern triton was the reason for excluding this shell from the Smoking Room and the bequest. It remained in the Morning Room until 1922, where it appears in the inventory of Ferdinand’s sister and heir, Alice.

The shell is signed by a master of nautilus engraving: Cornelius Bellekin (c. 1625-1711), a member of a distinguished Amsterdam family of engravers with clients in France and Germany. The artist's signature is very small and is not complete due to damage to the rim. The visored helmet made out of a shell and the carved ivory masks serving as strap mounts are both indicative of the Bellekin workshop. The helmet recalls the original trade of the Bellekin family as engravers of arms.

To carve the shell, once the outer layer was cut off, the design was painted on the mother-of-pearl under layer with a beeswax mixture. The unpainted parts were then corroded with alcohol. The design was finished with a small scalpel. The insects are reminiscent of those found in 16th- and 17th-century ornamental engravings.

The triton and support are later additions. They have been dated to around 1810-1830 and associated with triton and nautilus shell salt-cellars produced by the workshop of Paul Storr (1771-1841) for the Royal goldsmiths Rundell, Bridge & Rundell from 1810 (Leben and McLeod, 2002, p. 406). The sculpting is also reminiscent of the work of William Theed the Elder (1764-1817), a painter and sculptor who worked for the company of Rundell, Bridge & Rundell from 1803 to 1817 as chief modeller and head of the design studio, with the assistance of Edward Hodges Baily (Charles Truman, private communication, August 2014).

It is possible that Beckford commissioned Rundell, Bridge & Rundell to provide a new support for the shell which had probably lost its original mount. Beckford was one of the greatest British collectors of nautilus cups, having nine in his collection. Only the Waddesdon example and one at Brodick Castle, Isle of Arran, are now known. The Brodick Castle shell has a mount characteristic of work commissioned by Beckford from Gregorio Franchi (1770–1828) (Leben and McLeod, 2002, p. 406).

Following its restoration and its display alongside other treasures from Beckford’s collection in 2002, the piece joined the Smoking Room display at Waddesdon Manor. This room was restored in the 1990s and re-furnished to give a sense of the original appearance of Ferdinand’s Renaissance museum.

Some of the ‘treasure’ pieces collected by the Rothschilds are now understood to be composite works, involving the incorporation of earlier fragments into 19th-century mounts, designed to appear as original as possible. Many of these pieces were orchestrated by the collector-dealer Frédéric Spitzer (1815-1890), who became as famous for his private collection as Beckford had been, and who published it in an immense illustrated catalogue (see Y. Hackenbroch, ‘Reinhold Vasters, Goldsmith’, Metropolitan Museum Journal, 19-20, 1986, 163-268).

Beckford’s choice to mount the nautilus shell on a baroque-style triton, and his commission of Willes Maddox to record his treasures, is prescient of these later practices, although without the desire to deceive. In his choice to exclude the triton from his Renaissance museum, Ferdinand may have been exercising his allegiance with earlier British collectors such as Beckford and the Prince of Wales (1762-1830) against his suspicion of the practices of more modern collectors like Spitzer (see his remarks on Spitzer recorded in M. Hall, ‘Bric-a-Brac: A Rothschild Memoir of Collecting’, “Apollo”, (July 2007-August 2007), 59-60).

C. [B]el[l]ekin ~.
Maker's mark
[on front edge of the shell, incised and coloured in black ink, some damage]