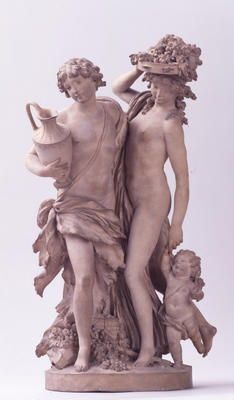 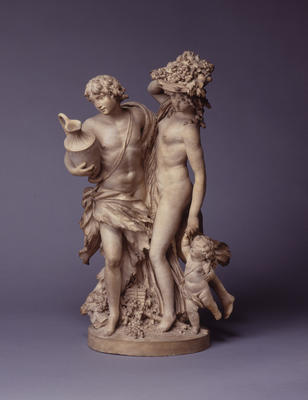 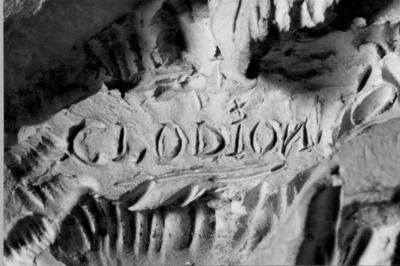 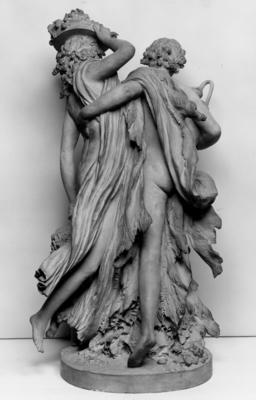 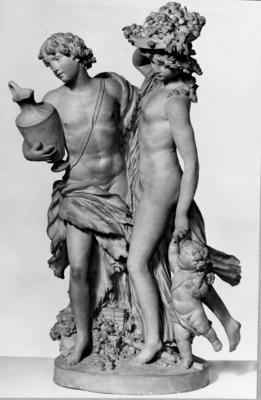 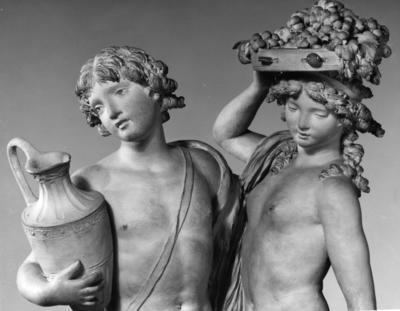 Terracotta group on a circular base of a male bacchant holding a vase, accompanied by a female bacchante who carries a tambourine full of fruit on her head and holds a child by the hand.

The naked girl and youth run forward, with their weight on respectively the left and right foot. He holds a wine jug with his right arm and passes his left round the waist of the girl. With her left hand she leads a running putto, carrying a thyrsus over his left shoulder. With her right she supports on her head a tambourine full of grapes. Drapery thrown over her right shoulder joins the two figures, together with an animal's skin which is suspended across his thighs by a thong passing over the left shoulder. On the ground, there is a vine branch and syrinx.

A young couple bring offerings for Dionysus or Bacchus, the god of wine, theatre and fertility. Clodion was an extraordinarily skilful modeller of clay during a period of unprecedented interest in the material among collectors. This family group is characteristic of Clodion’s lyrical evocation of the classical past.

The man carries an ewer, presumably full of wine. The tambourine on his companion’s head is full of grapes. The woman holds the hand of a little running boy. The boy holds a thyrsus – a staff topped with a pine cone - which was a sacred instrument at Bacchic rituals and festivals. On the ground there are more grapes and a set of pan pipes. The pipes introduce connotations of the god Pan or Faunus, who was associated with fertility and Spring.

Traditionally, terracotta was used to make studies for larger works in more robust and expensive materials such as stone or bronze, but by the late eighteenth century, terracotta sculptures were seen as independent works of art. Like red chalk, whose colour range and softness offered a parallel in drawing, terracotta was favoured for the representation of warm and yielding flesh. Contemporaries valued it for the way it retained evidence of the artist’s touch. Clodion incised the pitcher with crisp, linear decoration and he used a tool to gouge out slivers of clay to texture the rocks and plants at the back. Contrastingly, the grapes were formed in the sculptor’s hand and the figures’ skin was smoothed with wet fingers.

Clodion's works are usually undated. This sculpture is stylistically similar to others made in the early 1780s such as his 'Bacchant offering a platter of fruit to a bacchante who holds a child' (private collection, Switzerland). In the inventory taken after Clodion's death, there are several similar sculptures indicating that this was a popular subject. The exact nature of Clodion's production is still not known. He probably designed the compositions and modelled many of the finer terracotas himself, but it is unlikely that he executed all the sculptures attributed to him. His three older brothers were associated with him as junior partners, and probably helped produce works.

Clodion, the pseudonym of Claude Michel, came from a family of sculptors. He trained in Paris and Rome where he was influenced by the works of Michelangelo, Bernini and ancient Roman remains. Bernini's small terracotta studies of monumental sculptors inspired Clodion to develop his repertoire of small-scale mythological, religious and historical figures. Returning to Paris in 1771, Clodion set up a workshop on the Place Louis XV where he made works for the aristocracy and for public competitions. During the Revolution, Clodion moved to Nancy and his works became more classical in tone. He was later employed by Napoleon.

By the middle of the nineteenth century, Clodion's sculptures were highly sought after by collectors and connoisseurs, including Edmond de Goncourt. Baron Ferdinand de Rothschild managed to acquire seven of the finest examples.

Inscribed on rocks at back beneath woman's drapery: CLODǏOИ