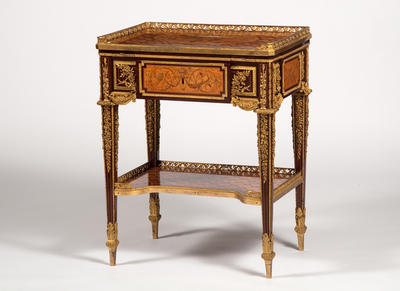 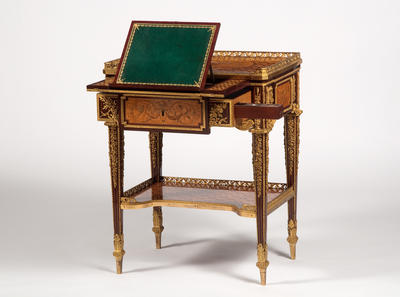 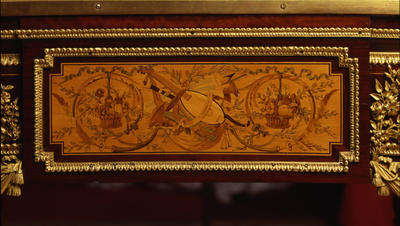 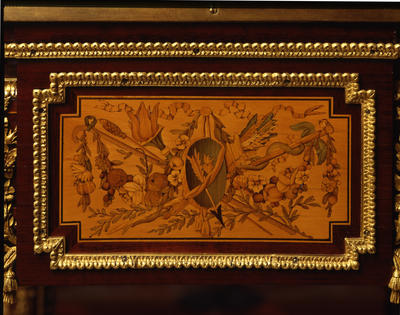 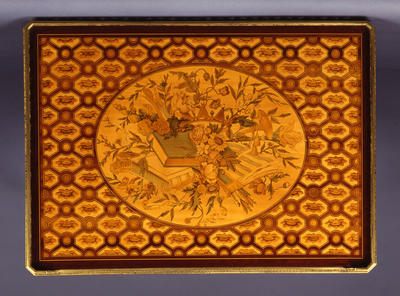 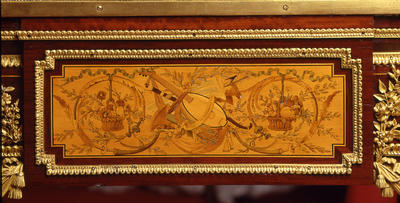 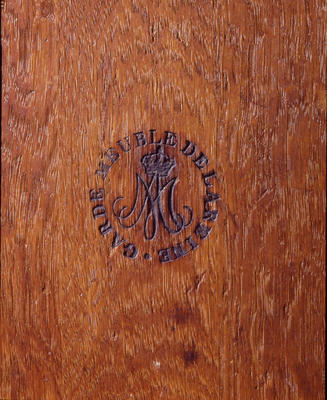 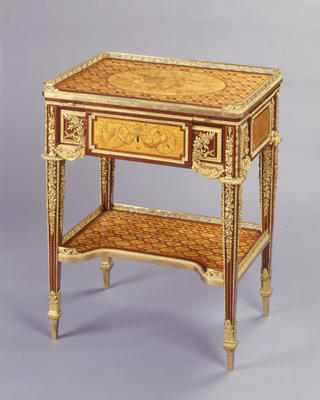 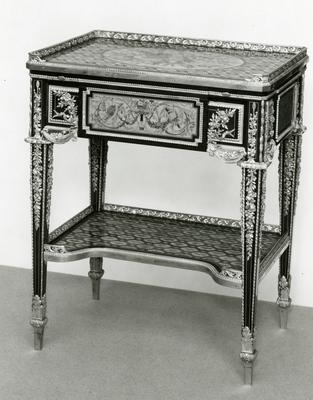 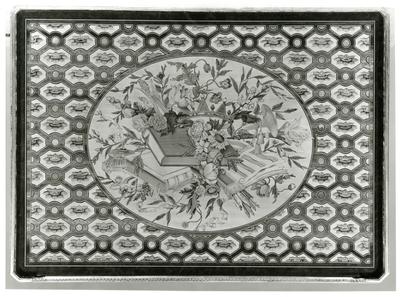 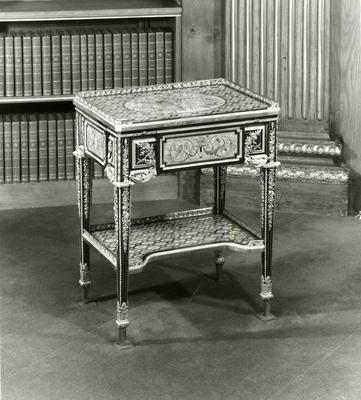 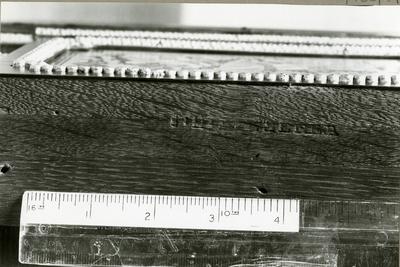 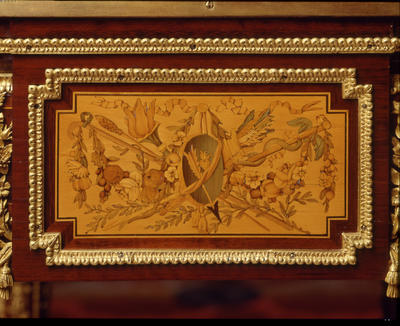 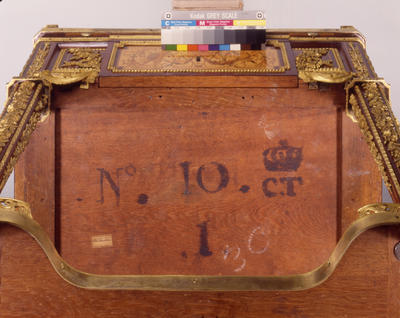 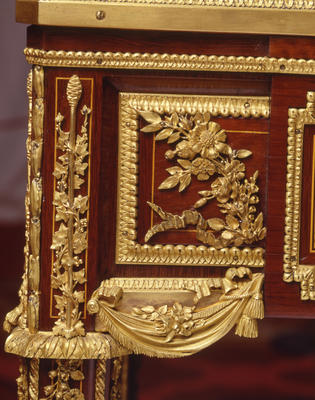 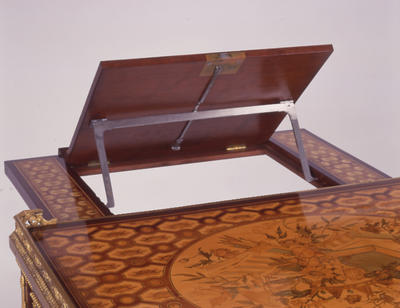 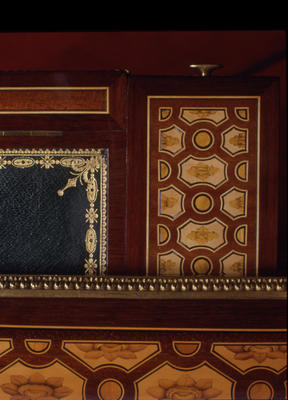 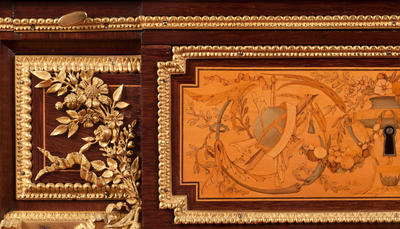 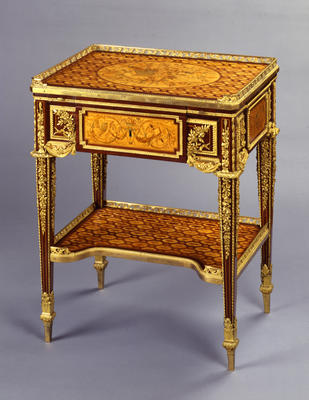 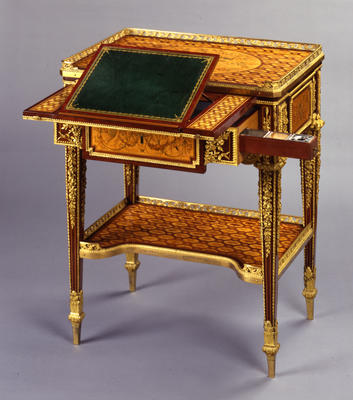 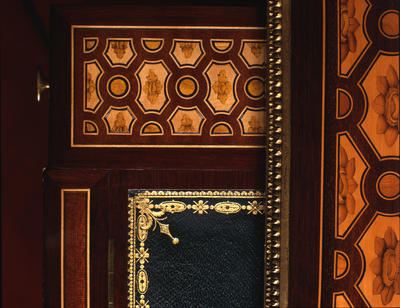 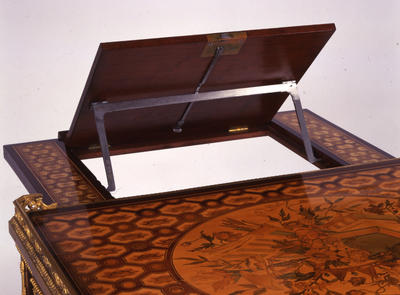 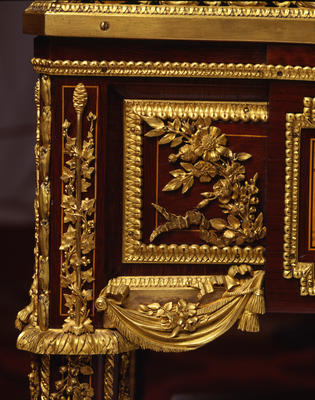 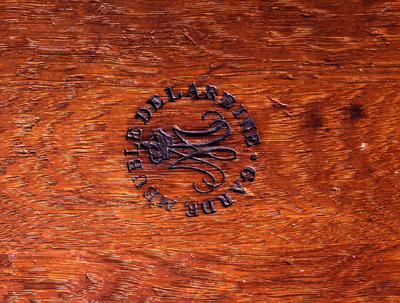 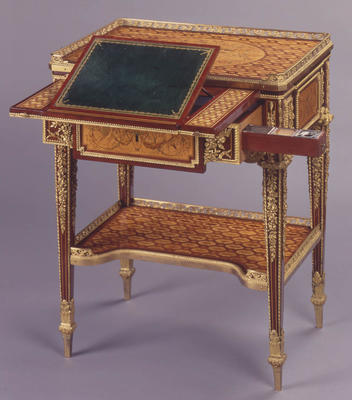 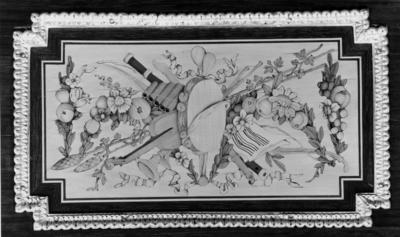 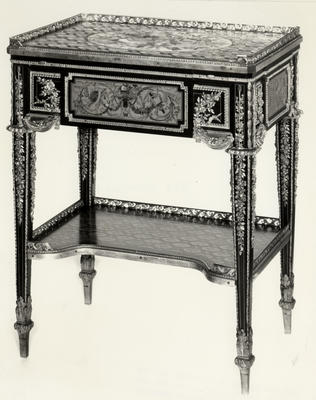 Marie-Antoinette, Queen of France, used this exquisite writing table at the Petit Trianon, the small palace she used as a retreat from the court at Versailles. An intimate piece of furniture from the Queen's private domain, the table was commissioned from her favourite cabinet-maker Jean-Henri Riesener (1734-1806).

Although Riesener made a number of small writing tables for Marie-Antoinette and other ladies at court, the extremely fine modelling of the gilt-bronze mounts sets this table apart from the others. Composed of incredibly realistic flowers carefully chased, gilded and burnished so that they shimmer in the light, the mounts can be compared to the fineness of jewellery.

The central oval reserve of the table-top and the panels on the four sides are decorated with intricate marquetry trophies of love and music, while geometric ‘fretwork’ marquetry fills the remaining table-top and lower shelf. The front frieze pulls out to reveal a writing slide, which can be adjusted to the preferred angle, beneath which is a drawer. A subsidiary drawer contains silvered compartments for writing implements and can be pulled out to the right when the writing slide is in use.

Although the table bears an inventory number from the Petit Trianon, and its decoration would have certainly harmonised with the interiors there, its exact early history is unclear. As a commission for the Queen, the table bears the brand of Marie-Antoinette’s personal garde meuble (furnishing administration) rather than that of the crown. The records of the Queen’s garde meuble are missing and the table has not been definitively identified in inventories of Royal residences.

It has been suggested that the table was created for the Petit Trianon but was transferred to the Château de Marly for the last stay of court there in June 1789 (see Castelluccio, 1996). Riesener had supplied a pair of chests of drawers for the Queen’s rooms at Marly in 1782 which feature similar mosaic and floral marquetry and spectacularly refined bronzes which one could imagine complementing the table (now Versailles, inv. no. V 3759; Louvre inv. no. OA 12012). Alternatively, it has been suggested that the table may have first been made for the Queen’s boudoir at Versailles, the cabinet de la Méridienne, before being moved to the Petit Trianon (see Pradère).

Research by Christian Baulez in the records of the gilder François Rémond (c 1747-1812) reveal that he gilded bronze mounts for Riesener’s furniture (see C. Baulez,’Toute l’Europe tire ses bronzes de Paris’, in "Bernard Molitor 1755-1833", exh. cat., 1995, pp. 77-101). The intricate mounts for a small table listed in Rémond’s journal on 27 January 1782 sound very similar to those on the Waddesdon table.

Ferdinand de Rothschild bought the writing table via the dealer Samson Wertheimer at the famous Hamilton Palace Sale of 1882. It was listed en- suite with two other pieces made by Riesener for Marie-Antoinette – a chest of drawers and a fall-front desk – both now in the Frick Collection, New York (acc. no. 1915.5.76; 1915.5.75). These two pieces have a similarly uncertain history but appear to have been supplied for one of several residences the Queen was refurbishing in the early 1780s, possibly the Château de Saint-Cloud. Although the table shares the same trelliswork and floral marquetry, it is unlikely that it was originally en-suite with the Frick pieces. Rather they were probably purchased by one of the Dukes of Hamilton to create an ensemble.

Ferdinand paid the then vast sum of £6000 for the table in 1882, which provoked comment and even ridicule in the press. Ferdinand, like many of his contemporaries, was fascinated by Marie-Antoinette. As a personal effect of the Queen, the table must have held a special appeal as well as representing the epitome of the style developed for her by Riesener in the early 1780s. This was demonstrated when Ferdinand chose to illustrate the table as a work of art in "The Red Book", an album he privately published in 1897 to record the architecture, interiors and collection at Waddesdon. Marie-Antoinette’s table was one of only two pieces of furniture featured, the other being a fall-front desk decorated with Sèvres porcelain plaques by Martin Carlin (c. 1739-1785 ) (acc. no. 2321).

Duke Hamilton
Inscription
on label on underside of bottom panel

ON LOAN FROM / 18
Label
on underside of bottom panel