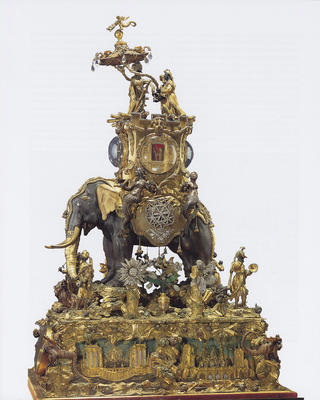 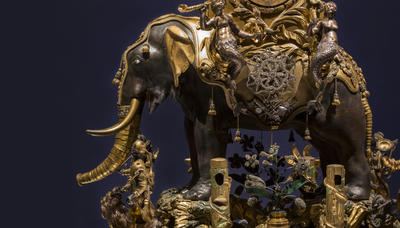 Musical automaton built in two parts. The upper part is in the form of an elephant supporting a howdah (seat with a canopy). The base is rectangular and contains the musical movement.

On top of the elephant, the howdah sits on a shabrack (saddle-cloth) with revolving serpentine wheels on each side. It has a siren or Nereid at each of its lower corners. It terminates at the top in a square castellated tower with canted corners which is mounted with twelve cannons. The howdah is mounted on the front and back with stylized revolving flower-heads behind domed glass covers. A bearded man in a turban holding a sword and mace stands on the top of the tower shaded by a canopy held by two servants with floral robes. On either side of the howdah are circular glazed windows opening on to architectural façades pierced in the centre of each with a rectangular aperture past which six Roman warriors rotate once in fifty seconds.

The elephant stands on a pierced rocky platform sparsely covered with vegetation and inhabited by snails, wyverns, a beetle, moths, and shells. Around the platform, standing at each corner on a revolving plate, is an Oriental figure playing a musical instrument. Between these figures, on either side, are two revolving flowers of differing designs, each mounted on a tree stump, which flank a vase of flowers. Surrounding the platform, there are also a lion, a crocodile, wyverns, snails, shells, and a lizard.

The sides of the rectangular base containing the musical movement are chased with rocks and plants; they incline inwards slightly towards the top, and are mounted at each corner with a large wyvern and elsewhere with animals including serpents, snails, whelks, frogs, alligators, and insects.

The four sides of the base are each pierced with two apertures separated on the front and back by a roundel protected by a bombé glass cover, and on either side by a rocky support.

The roundel on the front contains ten revolving stars around which two serpents weave on a backplate engraved with floral trails. In the apertures flanking it a serpent coiled in the shape of a helical torch revolves against a painted background. The roundel on the back contains a griffon gazing at a revolving star of complex construction against a painted landscape which extends on either side and forms the background to the revolving serpent coils matching those on the front. In the apertures on the sides a procession of figures passes framed by a stage setting of differing architectural design and against a theatrical backdrop in painted relief, also of differing design.

The elephant automaton was one of Baron Ferdinand de Rothschild's most admired treasures. It was mentioned in a local newspaper report of 1889 describing the visit of the Shah of Persia, who asked to see the mechanism perform again and again.

The elephant is operated by two keys inserted in the belly of the elephant and the base. The base plays a musical tune. The triumphal Emperor riding the elephant and the four musicians on the base move to and fro. The paste flowers, designed to imitate diamonds, rotate and open and close. Glass roundels in the base reveal revolving snakes and stars, as well as architectural scenes.

The automaton was made in London. It was reputed to have been made as a gift for an Indian official given by the French or English East India Company to cement a political or commercial alliance. Although this is unlikely, entrepreneurs such as the famous jeweller James Cox did make these complex automata, known as 'sing-songs', for rulers in India and China (see Roger Smith, 'The Sing-Song Trade: Exporting clocks to China in the Eighteenth Century', "Antiquarian Horology", March 2008, pp. 629-58). Cox organised teams of craftsmen to make these items. Several elephant clocks signed by different makers can be found in Asia but also in Europe. Automata and gadgetry were popular with 18th-century European rulers too. Makers in Britain, Germany, France and Switzerland specialised in developing ingenious mechanical toys.

It seems that the maker, Hubert Martinet, did not find a ready buyer for the elephant. It was displayed several times in London, and probably is also the elephant displayed later in the Netherlands and Paris, for the delight of the paying public (Mart van de Weil, correspondence, 2017, for Dutch provenance information). The style and quality of the craftsmanship suggests Martinet may have employed French craftsmen or their designs to construct this elaborate wonder.

Roger Smith (correspondence, 2011) has dated the automaton to 1768-1772 based on some of the decoration executed in a classical Greek style. There is little direct evidence for how long these complex machines took to make. Tietz (1853) argued that it took ten years, however Martinet, like Cox and other makers, was not a solitary inventor but a businessman-entrepreneur, and ten years would not have made commercial sense. Two to five years is probably more realistic.

It is not surprising that Ferdinand, with his well-informed knowledge of 18th-century decorative arts, should have acquired such an object. A famous elephant, almost certainly the Waddesdon example, was displayed in a travelling museum in Amsterdam, Haarlem and Arnhem in 1874, advertised as being a favourite with royalty (see Noord-Hollands Archief, Collection Museum Enschedé, inv. No. 1591).

H. MARTINET F.
Maker's mark
on the elephant's trunk between the tusks, lettered in paste, in imitation of diamonds

vorn
Inscription
on the reverse of two sections of the howdah, scratched

Daniel heu[se?]r
uhrmacher in Barmen
7. [?] 1829
Vorn
Inscription
on one of two main plates of driving mechanism inside the elephant

7 m 1827 Journal ... Meister In Lurnum
Inscription
on one of two main plates of driving mechanism inside the elephant