Our grounds and car park are now open Wed-Sun. All visitors must pre-book their visit.

NOTE: Tickets until 14 June are now sold out, more tickets will be released on Fri 5 June. 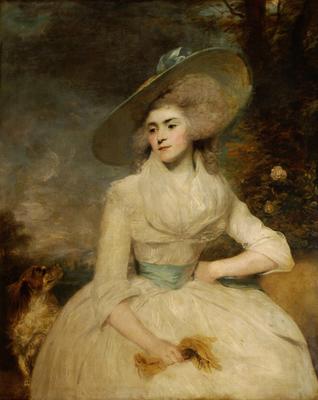 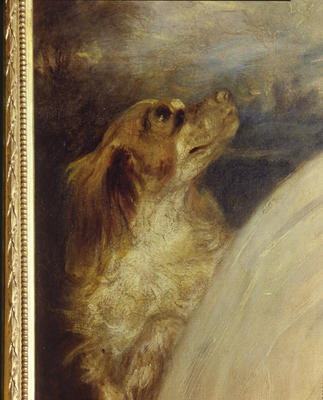 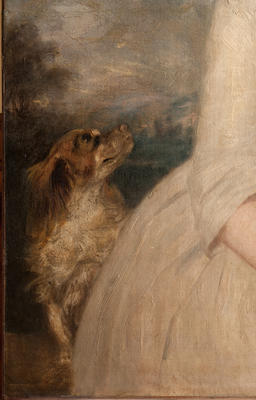 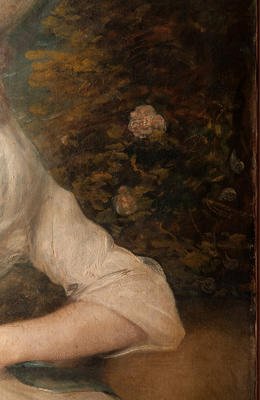 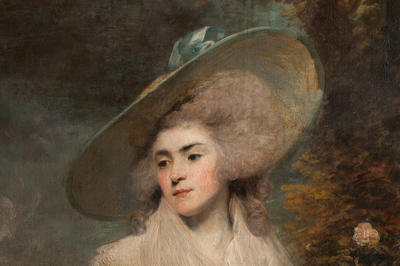 Three-quarter length oil portrait of Mrs Emma Scott of Danesfield. She is shown seated against a background of trees and roses to the right, and an open landscape with trees and sky to the left. She wears a white silk tight-waisted dress with a full skirt, gauze fichu and a blue sash; powder in her hair and a wide-brimmed hat with a blue ribbon. She holds beige kid gloves in her right hand, which also has a ring, and leans on a block with her left elbow. She looks down diagonally left. To the left, there is a small King Charles spaniel looking up at her, with one paw raised.

Emma Assheton Scott was the wife of Robert Scott who bought the estate of Danesfield, near Medmenham, Bucks, in 1787. Joshua Reynolds painted both Emma and her husband. Rather than drawing on classical mythology or religious symbolism to elevate his sitter, Reynolds used simple imagery to depict a faithful, beautiful wife.

The portrait was made four years into their marriage. Emma had eleven sittings with Reynolds over three months. The white colour of the dress, suggesting purity and chastity, is accompanied by the prominent ring, a symbol of Emma's commitment to her husband. The small dog not only adds a lively note to the scene, it is also an ancient symbol of fidelity.

Reynolds used a palate of white and greys and did not distinguish much between the different textures of textiles and hair. Some modern commentators have seen this as a failure, describing the painting as 'utterly unsculptural'. However, the strong diagonal of the hat as well as the rhythms created by the creams in the dog's fur, Emma's dress, and the rose in the tree, give a gentle sense of dynamism to the painting, matching the image of calm wifely virtue.

The simplicity of this portrait and the muted colours indicate that Reynolds was influenced by the minimal approach of the works of George Romney. Romney's portraits had become very fashionable by the early 1780s, partly because he charged significantly less for a portrait than either Thomas Gainsborough or Reynolds.

Robert Scott inherited a very large fortune from his father, also Robert (d. 1771) of Lauder, Co. Berwick. He had acquired it through commerce. Emma was the daughter of Thomas Assheton (Assheton-Smith after 1773), of Ashley Hall, Bowden, Cheshire. The couple had no children. Emma is buried at Medmenham. Reynolds's portrait of Robert is now lost.

Mrs Scott of / Danesfield the Aunt / of J. Assheton Smith
Label
on verso, pen and ink