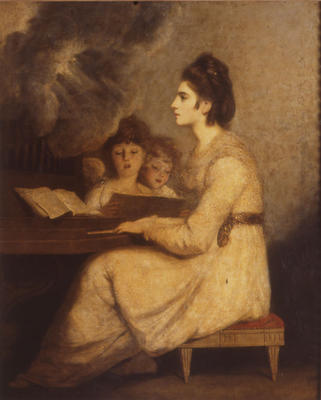 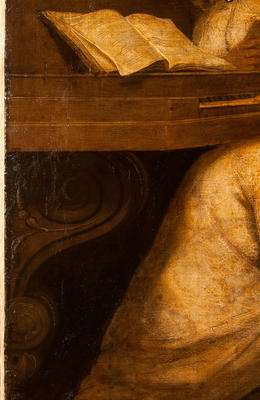 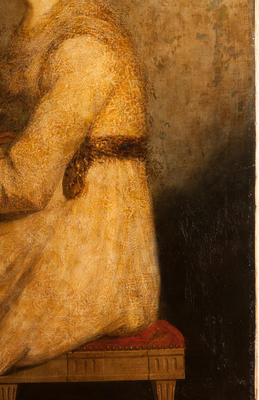 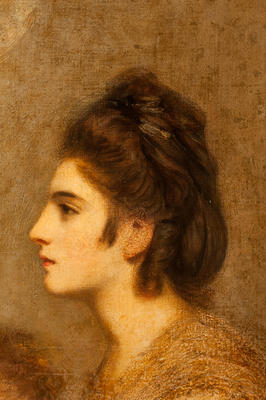 Full-length portait of Mrs Elizabeth Linley Sheridan as Saint Cecilia. Elizabeth sits facing the left, with her left side in profile, on a very low stool before a pipe organ, which she plays. She wears a simple belted muslin dress with a gauze collar. There is an open book on the organ, but Elizabeth appears to stare at clouds and a ray of light that materialise above the organ. Behind, there are two young angels singing from a book they hold open.

Elizabeth Linley Sheridan was a famous singer and writer. Several of her contemporaries described her voice as divine and the theatre director David Garrick nicknamed her 'the Saint'. Joshua Reynolds elevated her character by showing her as St Cecilia, the patron saint of music.

The painting was made in 1775, at the height of Reynolds's career. Fanny Burney reported seeing the painting in Reynolds's studio on 28 February 1775 (see Mannings and Postle, 2000: 412). It shows his tendency to intellectualise the art of portraiture by posing his sitters in the guise of mythological or classical figures. He painted a picture of St Cecilia for Sir Watkin Wynn's music room (now Los Angeles Country Museum), which may also show Elizabeth. Reynold's may have felt the Waddesdon portrait was a better painting, as he did not exhibit Wynn's painting in 1774 as originally planned. Instead, he showed this painting at the Royal Academy exhibition of 1775. It has been suggested that the square format of the Waddesdon painting means it was also painted to be a decorative panel. The clouds give the painting a Baroque feel, which Reynolds exploited in many of his paintings. The colouring is Venetian in tone. The composition relates to 17th-century paintings by Rubens and Poussin.

St Cecilia was a Roman woman of the 3rd C BCE, who became popular due to a late 5th-century legend that she maintained her virginity, refused to perform a sacrifice, and was extremely difficult to kill. She became patron saint of music from the 16th century on because in her Acts there is the line 'as the organs (at her wedding feast) were playing, Cecilia sung (in her heart) to the Lord, saying: may my heart remain unsullied, so that I be not confounded'. Reynolds may have been referring to this line in his inclusion of the organ and angels.

Elizabeth was renowned for her sweet voice and beauty, although her voice could not compete with Italian singers. Her father, a musician from Bath, put her on the stage from an early age, and managed her career touring the country. He is reputed to have made £10,000 from her performances. The painting was made for Elizabeth's husband, Richard Brinsley Sheridan, a playwright. Elizabeth had met Sheridan whilst fleeing the advances of a married suitor. They married in 1773, probably illegally, but the relationship cooled once Sheridan began seeing other women. Elizabeth stopped performing once married but continued to write music, plays and verse - sometimes uncredited - and supported her husband in his theatrical and political careers. His affairs continued, and finally caused their relationship to break down. Elizabeth later began an affair with Lord Edward Fitzgerald (1763–1798) and bore him a child in 1782, dying only a few months later from tuberculosis.