Mrs Smith as a Wood Nymph 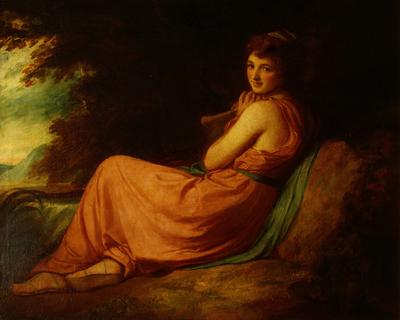 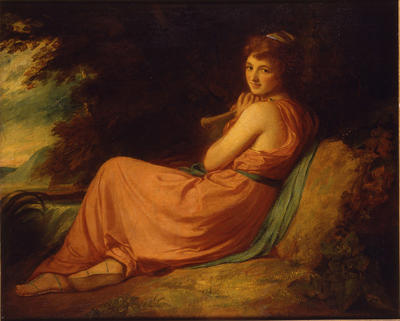 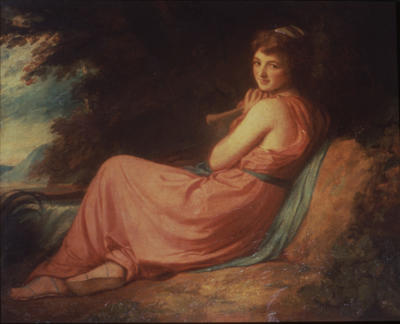 Full-length portrait of a reclining Emma Hart looking over her shoulder. Emma wears a simple red dress with blue sash and sandals, with her left arm and shoulder bare. Her hair is tied back in a wide ribbon. She holds a pipe towards her neck as she turns her head to look at the viewer. She smiles showing her teeth. She leans against a rock set in a woody glade. Sky, a hill and a wide river with a waterfall are visible in the left background.

Emma Hart married Sir William Hamilton, Ambassador at Naples, in London in 1791, when she sat for George Romney for two paintings intended for the Prince of Wales. Romney had painted Emma repeatedly between 1782-1786. On her return to England in 1791, he painted several canvases of her including this one which shows her in the guise of the nymph Calypso, upon whose island Odysseus was shipwrecked.

In a letter of 1792, Romney referred to this painting as showing Emma in the role of Calypso. Calypso was a sea nymph from Greek mythology, who imprisoned Odysseus on her island, and wanted to make him her husband. Zeus finally ordered her to release him, but she did so only after bearing him two children. The theme certainly matches the seductive manner in which Emma addresses the viewer as well as her reputation as a scandalous beauty, bewitching male admirers. Romney treated the theme of shipwrecks and sirens in his drawings and paintings throughout his life.

Despite Romney's letter, Alex Kidson as recently argued that the painting may not have started life as a portrait of Emma on the basis that the lady's face is not immediately recognisable. He notes the similarity of the work to a description of another painting of a Mrs Smith in the role of a wood nymph made in 1785. Kidson believes that Romney skilfully manipulated his sitter and client to pass this canvas off as a portrait of Emma to accompany the pendant work of Emma posed as Mary Magdalene (fragment sold Sotheby's, New York, 25 January 2007, lot 71).

Romney was the only fashionable portrait painter of his day who was not a member of the Royal Academy. He learnt his art in the North of England, and came to London in 1762. In 1782, a friend and patron, Charles Greville, brought his new mistress, Emma Hart, to Romney. From 1782-1791, Romney painted Emma many times, drawn to her vivacious personality as well as her good looks. He painted simple portraits in contemporary dress as well as many of her in the guise of allegorical, mythological or religious figures. He missed her greatly after she went to Italy and they wrote each other letters.

Emma Hart was the daughter of a blacksmith, who died a month after she was born. Her mother placed her as a nursemaid with a local surgeon, and she then found work in the same profession in London around 1778. She began singing, and may have been an actress. The death of her charges meant she left her profession, and entered the world of the London entertainment scene. By 1781, she had become involved with the young rake Sir Harry Fetherstonhaugh, and was reputed to live a wild life. After a few years, she was taken under the protection of Fetherstonhaugh's friend the Honorable Charles Greville. She became Greville's elegant hostess as well as his mistress. William Hamilton was Greville's maternal uncle. Greville arranged the match between his uncle and his mistress in 1784 on the condition that he would inherit Hamilton's fortune. Emma went along with the arrangement after initial upset. She soon adapted to life in Naples, and became Hamilton's mistress, and then his wife.

Emma was painted by many artists, including Joshua Reynolds and Elisabeth Louise Vigée-LeBrun. They admired her neo-classical beauty and poise, and her ability to strike poses after the figures on Greek vases communicating the emotions that were studied by artists at the time.

The painting's provenance is as intriguing as its subject matter. Alex Kidson has traced the painting's history to prove that this was once owned by the Marquess of Hertford. Between 1875 and 1882, it may have belonged to the grandfather of Beatrix Potter, or this may in fact be an error in the stock-book of the painting dealership, Agnew's. Ferdinand de Rothschild bought the painting from the painting dealer Agnew, on the day they bought it from its previous owner Canon Thomas Phillpotts. Phillpotts had reputedly acquired the painting from 'a friend' for £30, although he may have been the man who acquired it from Agnew's after the 1875 sale. Ferdinand paid over £2000 for it. Phillpotts gave £1500 of his profits to Truro Cathedral for a new church porch.