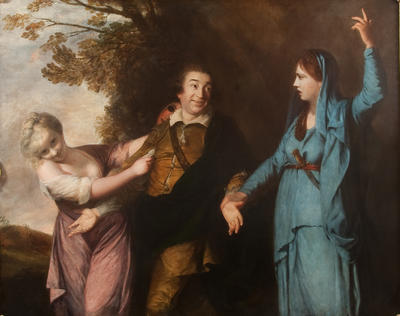 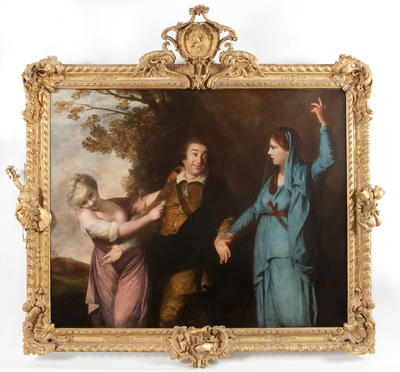 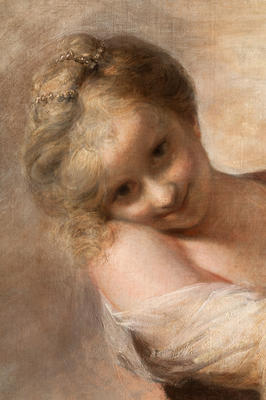 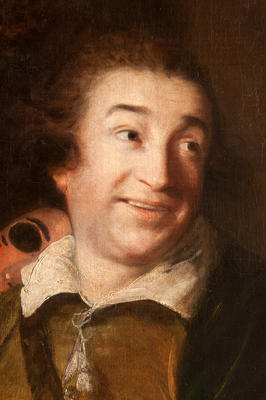 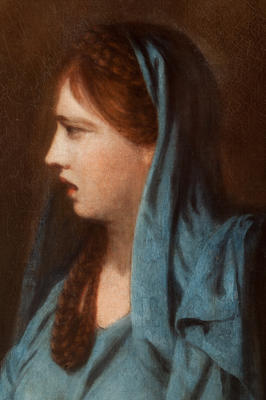 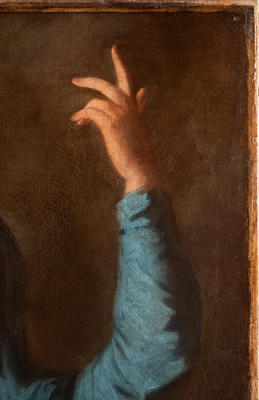 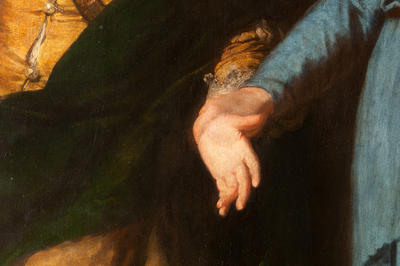 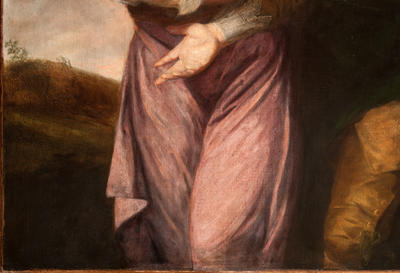 Large rectangular oil painting in landscape orientation, with three figures, in the centre a man, David Garrick, accompanied by two women, one on either side, one personifying Comedy, the other Tragedy. On the left, Comedy, dressed in a low-cut pink dress, pulls Garrick's clothes. On the right, Tragedy, dressed in blue classical robes with a veil, takes Garrick's left wrist and points up. Garrick looks at Tragedy, but his body turns to Comedy. The three figures are portrayed in an exterior setting with trees in the background.

The painting is supported on an early 20th century stretcher with four openings, held within an elaborate carved and gilded wooden frame, with trophies decorating the top, and both sides.

David Garrick (1717-1779) was the most famous English actor of the eighteenth century. Particularly associated with Shakespearian roles, he introduced a more naturalistic and expressive style of acting that transformed the European stage. He also wrote plays and ran the Drury Lane theatre. He was remarkably good at promoting his own image and inspired several works of art.

Reynolds was interested in painting elevated, intellectually ambitious pictures. He had travelled to Italy in 1750-52, studying the works of the Old Masters, and later became the first president of the Royal Academy of Painting, which he helped to establish. This portrait glorifies both Garrick’s skill as an actor and Reynolds’s abilities as a learned artist. The mock-heroic composition is full of jokes and references to mythology and the Grand Tradition of European painting, including works by Peter Paul Rubens, Antony Van Dyck, Guido Reni and Antonio da Correggio.

Garrick is shown caught between the muses of comic and tragic theatre. The subject is based upon the story of the Choice of Hercules, found in ancient Greek and Latin literature, depicted by several artists, and widely known and discussed in eighteenth-century Britain. The classical god Hercules had to choose between Virtue and Pleasure. He chose the more difficult but honourable path of Virtue. In this portrait, Garrick laughingly apologises to the figure of Tragedy while he yields to the seductive figure of Comedy.

Comedy, looks out at us, proud of her triumph. The figure demonstrates Reynolds’s mastery of the soft style of Corregio and the fluidity of rococo painting. The figure of Tragedy is strong and stiff, more like the work of Guido Reni or the newly fashionable Neoclassical style. Her declamatory gesture looks back to an old-fashioned style of acting from which Garrick leads Comedy away.

The frame complements the painting. The musical instruments and mask of Comedy and the chalice, emblematic of Tragedy echo the themes of the painting. Together with the scroll and portrait of William Shakespeare they pay homage to Garrick’s talents as an actor-manager and playwright.

WO/11497
Label
on verso, upper left on stretcher, label