Figures outside an inn 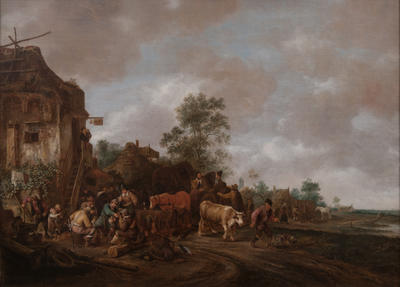 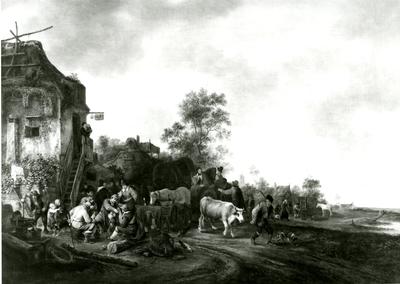 Oil painting of a landscape with figures and cattle, including travellers and soldiers, outside an inn.

This painting has long been recognised as one of the finest examples of Isack van Ostade's work, admired for its liveliness and variety of detail as much as for the warmth of its colouring and masterly arrangement of light and shade.

Isack van Ostade trained under his older brother Adriaen van Ostade (1610-1685), whose painting "The Musicians" (acc. no. 2169) is at Waddesdon. The interior scenes with peasants that dominate Isack's early subject matter reflect Adriaen's influence. However, the present work, which was painted towards the end of Isack's short life, demonstrates his fascination with landscape. By this point, Isack had developed a masterful technical and colouristic skill that evoked the tones and moods of nature, the times of day, and the changing seasons.

Landscape and genre elements are integrated harmoniously in Isack's powerful diagonal composition. In the foreground, a group of soliders are drinking, smoking and conversing. They are apparently unaware of the travellers who have just arrived, descending from their cart, or of the man driving cattle along the muddy road. At the top of the steps to the inn, a woman, with a child in her arms, surveys the scene, but still sees less than we do. Our spectator's view encompasses details that bring the composition together - the white shirt hanging on a washing line on the far left; the cream face of the central cow; the white horse in the right distance and the low lines of the landscape beyond.

The painting is recorded in Baron Ferdinand’s ‘Red Book’ which he printed privately in 1897 and lists, including illustrations, his collection of favourite works of art and pictures at Waddesdon. It was displayed in the Morning Room. Prior to Ferdinand, it was owned by Sébastien Érard, an instrument maker credited with the development of the modern piano; and later by the collector and bibliophile, Frederick Perkins, head of the Barclay Perkins & Co brewery.

2386
Label
on verso on stretcher