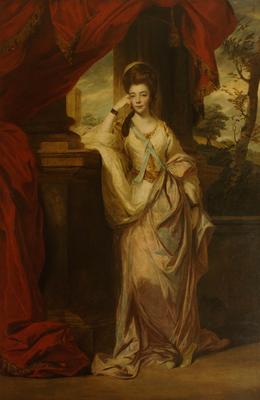 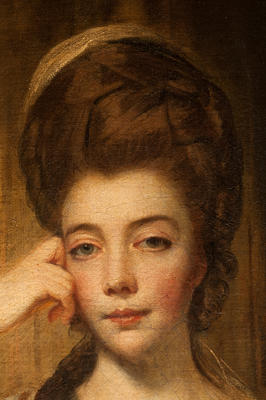 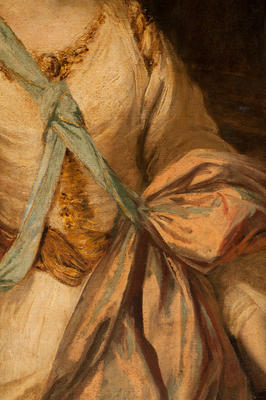 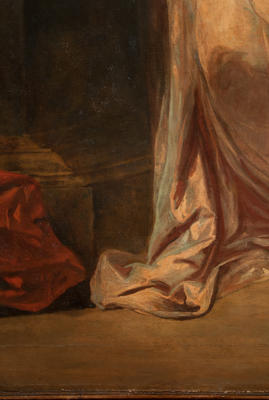 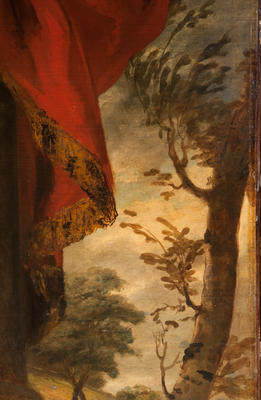 Full-length oil portrait of Anne Luttrell, the Duchess of Cumberland. Anne stands with her right elbow resting on a column pedestal, and her hand to her head. Her right leg is crossed over her left. She wears her hair in a tall style, topped with a blue cap or ribbon and a flowing white dress with blue ribbons crossed over her chest. She wears a wide bracelet on her right arm. She stares out at the viewer with heavily lidded eyes. She stands against a column and a low wall. Another column to the left is swathed in heavy red tasselled drapes. Behind the columns, there is a windswept landscape with several trees and a distant building on the left.

In posing Anne Luttrell looking seductively out at the viewer, Joshua Reynolds captured something of her entrancing beauty noted by contemporaries. Although deemed a commoner, Anne married Frederick Duke of Cumberland, the younger brother of George III, in 1771. Their scandalous union prompted the Royal Marriage Act of 1772 as well as Reynolds's flattering portrait.

Anne Luttrell was the daughter of Simon Luttrell, made the Earl of Carhampton in 1785. Horace Walpole remarked: 'The new Princess of the blood is a young widow of twenty four (sic), extremely pretty, not handsome, very well made, with the most amorous eyes in the world, and eyelashes a yard long. Coquette beyond measure, artful as Cleopatra, and completely mistress of all her passions and projects. Indeed, eyelashes three quarters of a yard shorter would have served to conquer such a head as she has turned.'

Anne's family were seen to be political opportunists – her brother gained a parliamentary seat, despite his rival's victory. Her first husband died in 1769, leaving her free to marry Frederick. Anne's marriage to the Duke of Cumberland horrified King George III. A marriage between a prince and a commoner de-legitimised any children from certain aspects of their inheritance. The Marriage Act brought in after their union stipulated that the descendents of George II (barring children of foreign-married princesses) had to get permission from the King to marry. The Duke of Cumberland refused to disavow the marriage and the King and Queen refused to see him.

Cumberland was not concerned with social status, so it was probably Anne who was determined to be recognized as a princess and forced the matter to the King's attention. The Duke's brother had married in secret in 1766, but had kept news of the union from the King. The difference in the temperaments of Anne and Frederick is reflected in an anecdote about one of the sittings for this portrait: 'the duke came in, tumbled about the room in his awkward manner, without speaking to Sir Joshua. The duchess thought it too bad, and whispered to him her opinion; upon which he came, and leaning upon Sir Joshua's chair while he was painting, said: 'What! you always begin with the head first, do you?' (see, Mannings and Postle, 2000).

The stately and solemn presentation of the Duchess in Reynolds's portrait, as well as the stress on her ability to turn heads with her eyes, was no doubt inspired by the Royal Marriage Act situation. The portrait was exhibited at the Royal Academy in 1773, along with Reynolds's portrait of the Duke, marking their union in a very public fashion. The pair were later painted by Gainsborough, who exhibited their portraits at the Royal Academy in 1777. Anne never paid for or claimed her portrait; it was still in Reynolds' studio at the time of his death.