Boy Building a House of Cards 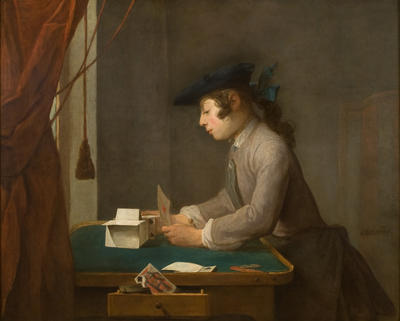 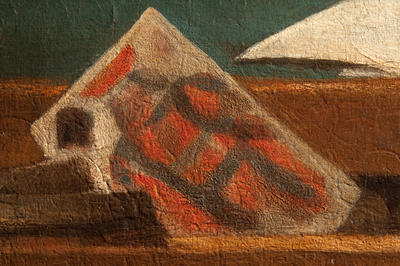 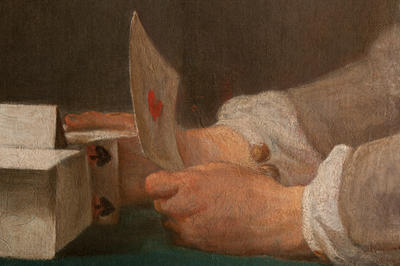 dated stylistically and by exhibition evidence

Oil painting depicting a boy building a house of cards. The boy sits to the right of the composition, in profile, with his arms on a card table in front of him. He is shown half-length. He wears a blue tricorn hat and a grey jacket over a simple white shirt. His long curly hair is tied back in a large blue silk ribbon. There is a small square wooden card table with a green baize top before him. He holds the ace of hearts in his left hand, turned towards him and the viewer. With his right hand, he lays a card ontop of a construction consisting of four cards stood upright on their sides forming a rectangle, with two cards propped upright as a pyramid in the centre, and with one card laid face down on the left side of the pyramid on top of the rectangle. The cards all have blank backs. The card on the right side has two spades visible on its upper edge. On the table, in the foreground, there are two coins and a red flat stick and two cards, one card face down on top of a black suit card with one symbol at upper left. A draw in the side of the table, nearest the viewer is slightly open. There is a king of diamonds card sticking up out of the drawer, along with two other cards whose backs are in shadow. He sits in a room with grey walls before a window, just visible on the left behind a large red tasselled curtain.

A child playing – with cards, bubbles, spinning-top or shuttlecock – was a favourite subject of Chardin. Such scenes were derived from 17th-century Netherlandish vanitas works, which bore messages about the transitory nature of human life and the worthlessness of material ambitions, but Chardin’s also display a delight in the ephemeral phases of childhood for their own sake.

In this intimate, but monumental painting, the fragile paper edifice embodies the fleeting nature of childhood; the cards the role of chance. The prominent ace of hearts might represent the precariousness of love. The jack in the drawer hints at rascalry. The boy’s apron suggests he may be a servant who should be clearing up after a gaming party.

Chardin depicted a young adolescent building a house of cards on at least four occasions. His other versions of the subject are in the National Gallery of Art, Washington (c. 1735), the Musée du Louvre, Paris (c. 1737) and the National Gallery, London (c. 1737). The Waddesdon painting has a more elaborate setting than these. The red curtain with its golden tassel adds a note of opulence. A screen is just visible on the right of the boy; the artist painted it out, but it has become visible again over time. Against the strong verticals and horizontals of the wall, cord, table and card house, the viewer’s attention is caught by the invisible diagonal linking the boy’s eye to the card that he is trying to balance with his right hand.

This was probably one of the paintings that Chardin showed to his colleagues at the Académie Royale de Peinture et de Sculpture in 1735, when he put his name forward for an academic position. It was almost certainly shown at the Paris Salon of 1737. Prints after the painting were made soon after its creation. An engraving by Pierre Fillœuil amplified its moralising note with a little verse about how old men should not mock the young since their schemes can be just as insubstantial. A series of etchings by Antoine Marcenay de Ghuy drew out the Rembrandtesque melancholy that several contemporary viewers found in Chardin’s genre paintings.