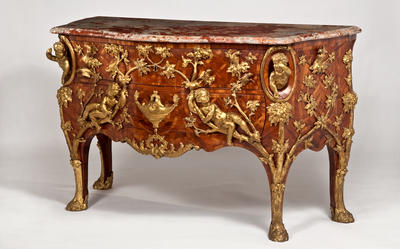 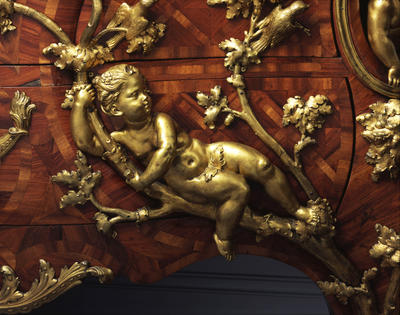 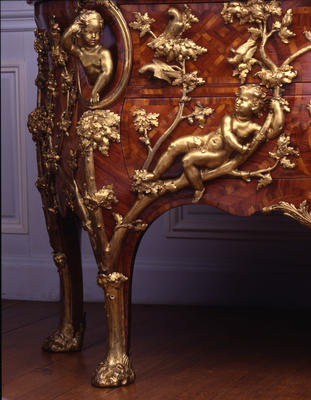 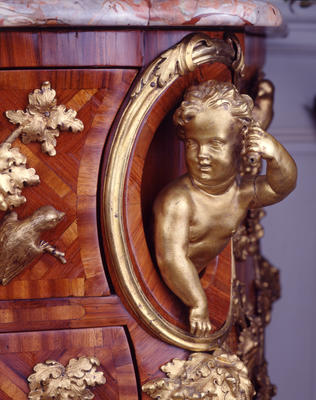 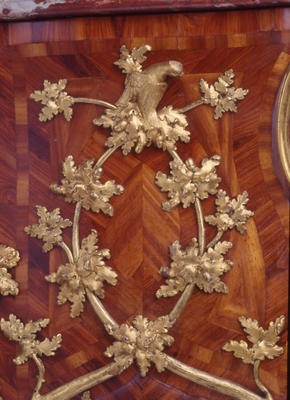 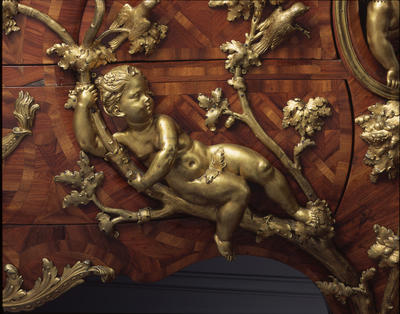 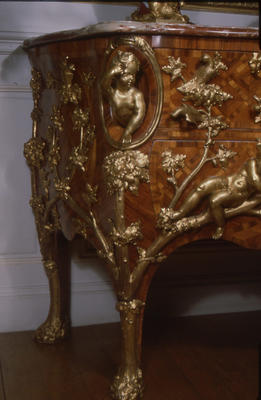 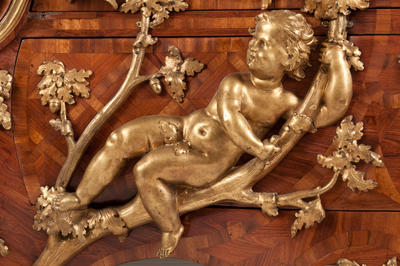 This chest of drawers is one of the finest examples of the workmanship of Charles Cressent. He made both the wooden chest of drawers and its gilt-bronze mounts, contravening French guild restrictions in France. The dramatically curved shape of this piece, which shows off the colours and patterns of the geometrically veneered woods, combined with the highly sculptural mounts attest to Cressent’s great skill as both a cabinetmaker and a sculptor.

Cressent was a leading ébéniste (cabinetmaker) of the Régence (1715-1723) in France. He was the son of François Cressent (1663- c. 1775), sculptor to the king, and the grandson of a cabinetmaker, also named Charles. He studied both crafts and went on to work in the studio of the famous cabinetmaker and master of marquetry André-Charles Boulle.

Although Cressent’s early work shows a clear debt to Boulle’s studio, this chest of drawers demonstrates his distinctive mature style, with elegantly curved surfaces and elaborate mounts in dramatic relief. His later work moved towards simpler mounts with a greater emphasis on the wood veneers and, as such, this chest of drawers represents perhaps the peak of Cressent’s sculptural style. Cressent served the richest and most fashionable clients in Paris and abroad, including the King of Portugal and the Elector of Bavaria, and was appointed both ébéniste and sculptor to the Regent, Philippe II, Duke of Orléans in 1715.

Cressent made many other chests of drawers of similar construction, with two drawers and curved legs ending in feet modelled as lions’ paws, organic forms, or decorative motifs. Of particular note in relation to this piece is a pair, now in the Residenz Museum, Munich, which have gilt-bronze mounts featuring palms and infant musicians emerging from the upper front corners (see A. Pradère, "Charles Cressent", cat.121-122).

However, the Waddesdon chest of drawers is rare in Cressent’s oeuvre in its sheer complexity and ambitiousness. Pradère has described it as the furthest Cressent went into the Rococo style. The branches are sinuously curved, with each knot and hollow defined, and the infants that boldly emerge from the corners are modelled fully in the round, more sculptures than decorative mounts. The handles of the drawers are ingeniously designed so that they are integrated into the mounts and do not interrupt the scene – the handles of the top drawer are created by bends in the oak branches either side of the lock and the handles of the bottom drawer are formed by the arms of the reclining infants which cross over their bodies.

Cressent is known to have employed craftsmen to chase and gild his elaborate bronzes in his furniture workshop. His bronze output was not limited to mounts for furniture, rather he produced impressive wall-lights, chandeliers, clock cases and mirror frames, and even sculpted the bronze bust of Louis, the son of his patron Philippe II, Duke of Orléans, after his death, now in the Bibliothèque nationale de France (see Pradère Charles Cressent, cat. 287, p.308). The pictorial rather than purely decorative quality of Cressent’s mounts may owe something to his passion for collecting paintings, and comparisons have been made between his figures and those of the painters Antoine Watteau (1684-1721) and Claude Gillot (1673-1721).

Cressent’s dual practice as sculptor and ébéniste flouted the strict guild regulations in France which forbade both the practicing of more than one craft by a single master, and the execution of multiple crafts in a single workshop. Legal proceedings were taken against Cressent by the guild of casters and gilders in 1722, 1733 and 1743, in which Cressent justified his practise by claiming that having the bronzes cast in his own workshop ensured that duplicates could not be made from his models and thus his designs could not be stolen. It is therefore relatively safe to assume that Cressent’s bronze mounts should not be found on another ébéniste’s furniture and thus pieces of furniture can often be attributed to Cressent based on their mounts. This holds true until 1765, when unfinished models were included in the sale of Cressent’s wares and may have been bought and worked up by other makers (Pradère, French Furniture Makers: The Art of the Ébéniste from Louis XIV to the Revolution, pp.130-134).

The records of sales of Cressent’s stock are an essential resource for identifying his work, as he never signed his pieces. His altercations with the guilds resulted in vast fines which meant that Cressent had to hold sales of his stock in 1749, 1757 and 1765 to raise funds to pay them. Cressent wrote his own catalogues to these sales, providing a great insight both into the range of his output and the character of the man. The Waddesdon chest of drawers does not appear to match any entry in the catalogues, although two pairs of encoignures, or corner cupboards, are described in all three of the sales (lots 10 and 15 in 1749, lots 143 and 144 in 1757, lots 86 and 89 in 1765) mounted with gilt-bronze mounts in the form of oak branches and birds, one pair of which likely formed an ensemble with the Waddesdon chest of drawers. One pair is extant and can now be found at Elton Hall, Peterborough. The repetition of this model is reinforced by the reference to pairs of corner cupboards with similar decoration in two inventories of Cressent’s clients. One was drawn up on the death of Emmanuel-Jacques Gaillard de Gagny, a prominent royal financier, in 1759 and the other on the death of Mme de Selle in 1786, the widow of Marcellin-François-Zacharie de Selle, the treasurer general of the French Navy and one of Cressent’s most important clients (Pradère, Charles Cressent, p.170).

The 1786 de Selle inventory suggests that the Waddesdon chest of drawers, or one very similar, was also part of that collection. It describes a chest of drawers made of rosewood and satineé wood, with two large drawers, closed by a key, ornamented with gilt branches, birds and infants. In Mme de Selle’s Parisian apartments, the commode and corner cupboards were complemented by tapestries from the Gobelins manufactory that depicted gardening infants (Pradère, Cressent, pp.59-61, pp.156-159.) The chest of drawers reappears in an inventory of the Department of the Navy in 1808, where it had arrived as a result of revolutionary confiscations (Pradère, Cressent, p.158). Given that at least three pairs of the complimentary corner cupboards are recorded – two in Cressent’s sale catalogues and one in the Gaillard de Gagny inventory of 1759, it is likely that the chest of drawers now at Waddesdon also existed in further repetitions. The Waddesdon chest of drawers is, however, the only extant example of this design.

The existence of the complementary corner cupboards in the sale of 1749 means that the chest of drawers almost certainly also predates this sale. Geoffrey de Bellaigue has argued that the particular structure of the carcass, with a transverse rail between the two drawers, leads to an earlier likely date as this device was largely abandoned by Parisian ébénistes around 1740 (Geoffrey de Bellaigue, The James A. De Rothschild Collection at Waddesdon Manor: Furniture Clocks and Gilt Bronzes, vol. I, cat.44, p.203). Further, he argues that the overall design of the bronzes, disguising the structural divisions of the carcass, marks the piece as dating from the early 1730s as opposed to later styles which evolved to show such divisions.

The piece entered the collection of the Dukes of Hamilton and was sold at the Hamilton Palace Sale on 20 June 1882, listed and illustrated as lot 1806. It was bought for £6,247 10s, an astonishing amount at the time, by Samuel Wertheimer acting for Baron Edmond de Rothschild. The chest of drawers was one of the most copied pieces of furniture in the nineteenth century, and its high-profile sale no doubt added to its fame and the desirability of copies, many of which were of high quality. The piece entered the collection at Waddesdon Manor through James de Rothschild who inherited the chest of drawers on the death of his father Edmond in 1934.