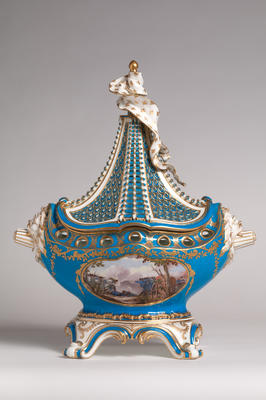 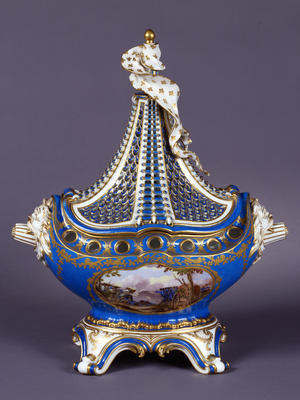 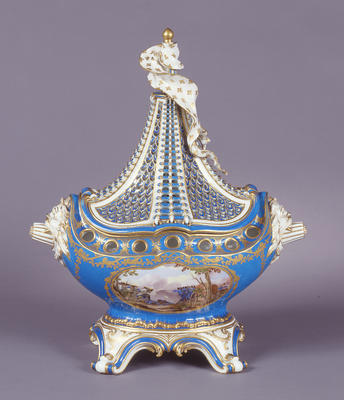 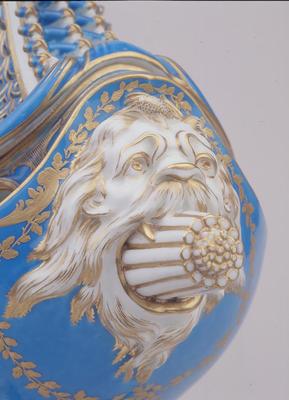 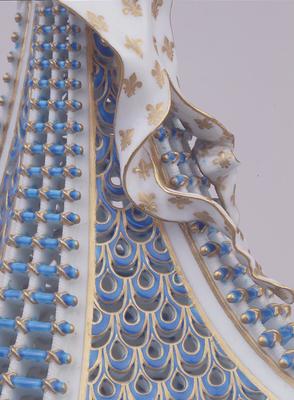 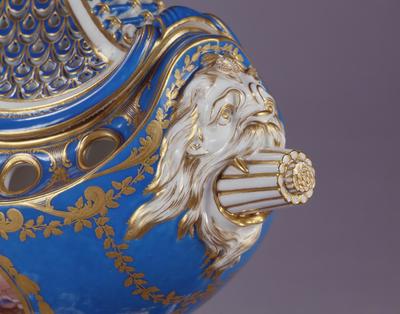 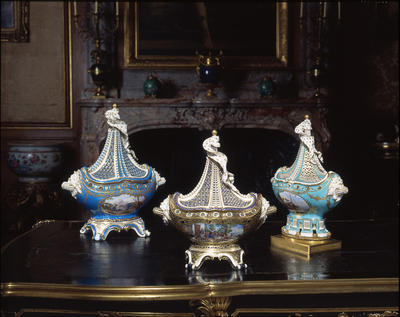 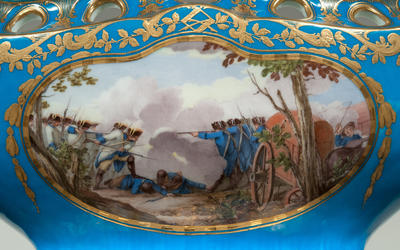 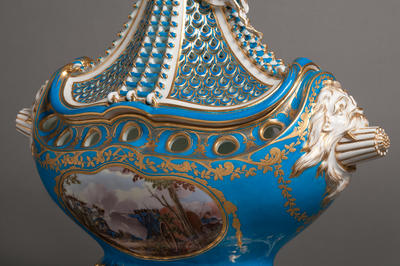 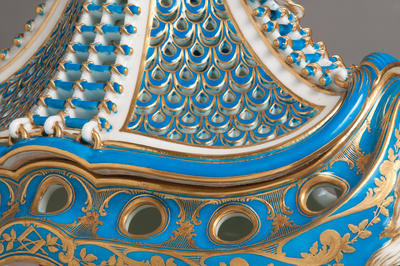 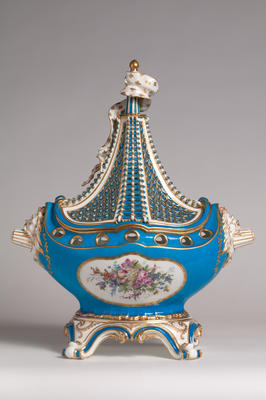 marked with the date letter I for 1762

Pot-pourri vase in the shape of a masted ship, the cover (extensively pierced) resembling sails and rigging and with a pennant attched to the top of the mast. On four scrolling feet. Bleu céleste ground colour with a battle scene on the front; the back decorated with flowers.

This vase in the shape of a masted ship is arguably the most famous model made by the Sèvres manufactory, and was copied by several English and Continental factories. Extensive openwork and piercing, of the sails and rigging on the cover and the round, porthole-like openings on the shoulder, are evidence that it was used to contain a pot-pourri mixture of dried flowers, herbs and spices. There is evidence to suggest that 12 were made between 1757 and 1764, although only ten are known today, of which Waddesdon owns three.

Given the difficulty of firing soft-paste porcelain successfully in the kiln, the cover is an extraordinary feat of technical achievement. The vase also demonstrates the very fine sculptural detail characteristic of the manufactory's production. Even the twist of the rope in the rigging can be seen. At both ends there is a mask with flowing hair surmounted by bulrushes. These indicate the association with water and, therefore, that the mask is that of a marine creature, despite its resemblance to a lion. Protruding from the creature's mouth is a ribbed spar like the battering rams found on Greek and Roman battleships. The oval basin shape of the vase is related to that of Louis XIV's nef, a ceremonial container for the king's napkin, cutlery and spices that was placed on the table when he dined in public. The shape also refers to the city of Paris which incorporates a ship in its coat of arms.

The difficulty and expense of producing such a sculptural object meant that the model was one of the most expensive vases sold by Sèvres. Despite the fleurs-de-lis in gilding that decorate the pennant on all the examples, this was not an object intended exclusively for the king and royal family, and several were purchased by important members of the French court. Madame de Pompadour bought two (one in the Louvre, Paris, OA10965. See P. Ennès, "Un défi au goût", Paris, 1997, pp. 34-5, 75; the other in the British Royal Collection, 2360.a-b. See G. de Bellaigue, "French Porcelain in the Collection of Her Majesty the Queen", London, 2009, vol. 1, pp. 122-7.) and another was bought by the prince de Condé (Metropolitan Museum of Art, New York, 58.75.89a,b. See D. Kisluk-Grosheide and J. Munger, "The Wrightsman Galleries for French Decorative Arts", New York, 2010, pp. 194-6).

The scene on the front of the vase shows a battle taking place between two armies, one side in white coats, the other in blue. Only seven other vases are known with this type of unusual decoration, distinct from the generic scenes of military camps more usually found on Sèvres (see acc. no. 3013) and somewhat startling and brutal on what is intended to be a beautiful object emitting delicate perfume. The pieces were produced between 1761 and 1763 and the Waddesdon vase is the earliest one. The dates correspond to the last three years of the Seven Years' War (1756-63) that saw France allied with Austria and Spain against Britain and Prussia. Although standardised military uniforms were not universal at this date, France and its allies mostly wore off-white, while the Prussians wore blue. It is, therefore, likely that the scenes refer to this war although the battles that are depicted are probably inventions of the artists.

I
Date letter
within factory mark