Please note the grounds are open for visitors Mon 25-Tue 26 Oct, the House will be closed. 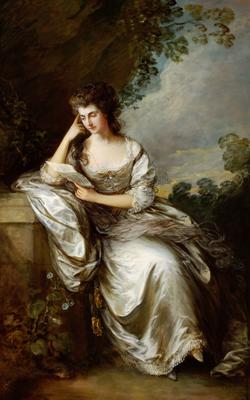 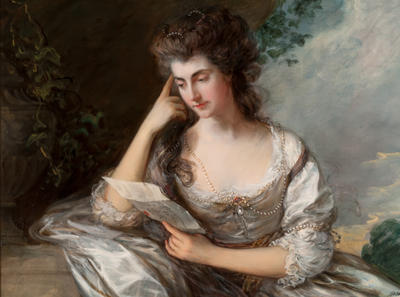 Full-length oil portrait of Mrs John Douglas (Frances Browne), seated and reading a letter. Frances leans her right elbow on the pedestal of a sculpted classical vase to the left. Her finger supports her head. She reads an open letter, the writing suggested but not legible, held in her left hand. Her right leg is crossed over her left. She wears a low-cut silk dress pinned with a red lozenge brooch with a voluminous overskirt that she uses to rest her elbow on. It falls to the right, revealing her underskirt and slippers. Strings of pearls decorate her hair, décolletage and sleeves. A large tree appears to the left. Clouds and trees in the distance appear to the right. A wild convolvulus plant grows in front of the pedestal.

Gainsborough’s ravishing brushwork and subtle use of colour was recently re-revealed when this painting was cleaned. The range of whites is visible again, in the skin, the layered fabrics, the paper and the pearls.

Little is known about the sitter. She appears to have married twice: to John Douglas, when painted by Gainsborough, and later to Major Herbert Gwynne Browne. Gainsborough included the portrait in the first private exhibition at his house, Schomberg House in 1784, when it was described in the "Morning Herald": ‘This lady is represented reclining. An air of sensibility and solitude diffused over her countenance’.

The pose recalls the traditional representation of Melancholy, and helps to articulate the emotions of the sitter who has withdrawn to a secluded and overgrown corner of a garden to read a letter. Perhaps it is from her husband or from an absent friend.

This painting is a splendid example of a type of portrait that Gainsborough developed during the 1770s and 1780s in which he integrated the sitter into the landscape. The artist manipulated his pigments to suggest Mrs. Douglas’s naturalness and ease in her pastoral solitude. Gainsborough emphasised the relationship between the woman and her environment by painting the clouds behind her and the filmy drapery billowing across her lap with similar silvery mauves and fluid transparent brushstrokes.