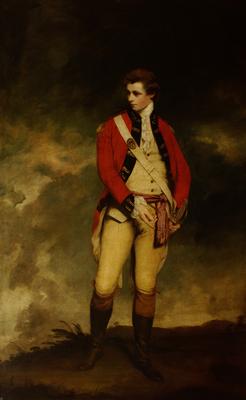 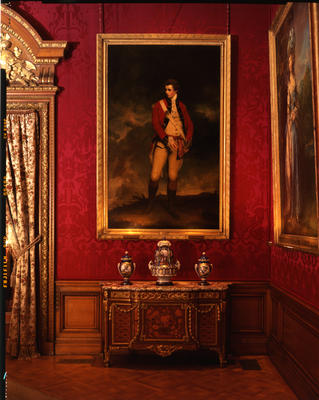 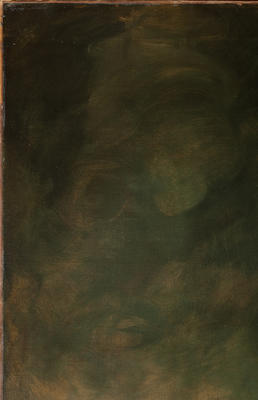 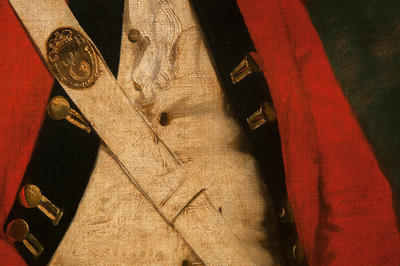 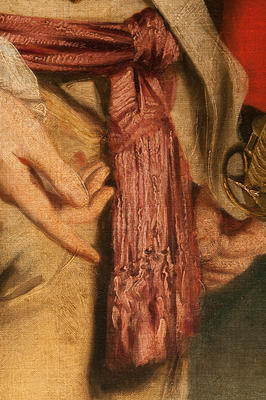 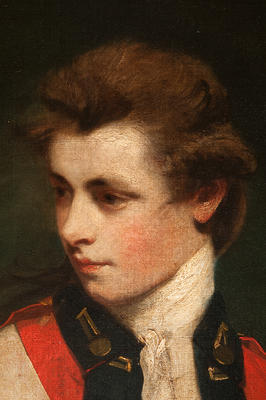 dated by payments to Reynolds

Full length portrait of Captain John Hayes St Leger standing on a hill with stormy clouds behind. He is wearing the uniform of a captain in the 55th Foot with the distinctive brown tops to the black boots. His body is turning towards the right, with his head turned left in three-quarter profile. His left leg is slightly forward; and his right leg bent. He places his left hand on sword just beneath the hilt and points down with his right hand.

Joshua Reynolds combined several modern and antique sources to convey the appeal and drama of the soldier and rake, Captain John St Leger, known as 'handsome Jack'. In Ferdinand de Rothschild's time, this was the only male portrait by Reynolds at Waddesdon. It was bought as a pendant to a painting by Gainsborough of the Prince of Wales, creating a direct comparison between these 18th-century rivals.

St Leger was a captain of the 55th Foot Regiment, whose uniform Reynolds shows in great detail. He was also a very close friend of George, the Prince of Wales. His unruly behaviour caused the King to warn his son against emulating 'conduct that makes all good men despise a St Leger'. John's uncle, Anthony St Leger, started the famous horse race in Doncaster. In 1782, the Prince of Wales commissioned portraits of himself and St Leger by Gainsborough; Gainsborough's portrait of the Prince of Wales hangs in the same room at Waddesdon (acc. no. 2258) whilst that of St Leger is in the Royal Collection.

Reynolds painted his version four years before. He combined a very simple pose with allusions to classical sculpture and Old Master paintings. The pose appears to be a conflation of the antique statues known as the Apollo Belvedere, the Capitoline Antinous and the Meleager. The length of the figures has been compared to paintings by El Greco and the boyish military figure to paintings by Goya. The portrait marks Reynolds's development of the intellectual and classical potential of portraiture and foreshadows the baroque drama evident in his portraits of the 1780s and 1790s. The work was influential and inspired other artists such as John Singleton Copley.

In displaying the two paintings together in the Red Drawing Room, the main reception room of the Manor, Ferdinand de Rothschild not only demonstrated his knowledge of the original commission to Gainsborough. He also provoked a comparison between two great late 18th-century English portraitists that his guests would have enjoyed.