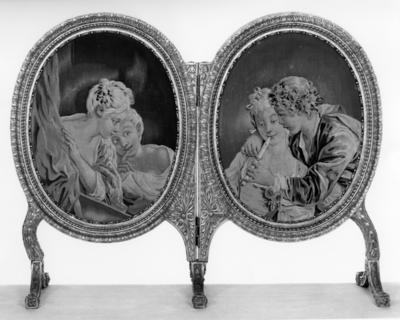 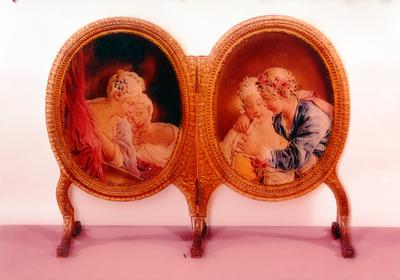 Double screen fitted with two tapestry panels after designs by François Boucher, one entitled 'Les Curieuses' and the other 'La Leçon de Flageolet'. The latter is a detail of a large panel forming part of the series 'Les Beaux Pastorales.'

The screen is in the form of two oval frames carved on both sides and hinged to fold both ways. It is raised on three pairs of splayed cross legs terminating in cubular blocks. Above the outer pairs the screen is supported on arched members which differ in shape to allow the screen to be folded.

The tapestries are stretched on individual chassis inserted from the back and secured there by four screws and in the front by the innermost moulding and a plain band contiguous to it. The centre band on the top edge is carved with laurel husks and crossed ribbons.

Each frame is carved on the front and back in two registers with an outer moulding of acanthus leaves and an inner one of water leaves. The frame supporting the tapestry panel is also moulded, composed of foliated husks and pearls threaded on a string.

The hinges are attached to wedge and triangular-shaped panels, decorated in sunken panels with laurel swags and single acanthus motifs. There is an acanthus rosette carved on the top of each motif.

The arched outer supports are carved on their four sides with acanthus leaves, and the legs with foliated arabesques (sides) and laurel husks (upper surface). The feet are each carved with four rosettes in square reserves with raised rims.

The source of the designs for both tapestry panels derives from tapestries produced at Beauvais in the third quarter of the 18th century. ‘Two girls behind a curtain’ is taken from two figures positioned near a fountain in the Beauvais tapestry ‘Renaud Endormi’, while ‘The Recorder lesson’ derives from ‘The Flute player’ from the ‘Noble pastorale’ series, first woven at Beauvais in 1755. Beauvais had cartoons of both these tapestries, which were provided by François Boucher. It seems likely that the designer at Beauvais adapted the two scenes from Boucher’s original cartoons. There is also a slim possibility that Boucher may have himself adapted his own previous tapestry designs for the specific purpose of a screen. The figure of the two girls, for example, occurs in a drawing signed and dated by Boucher to 1753.

The cleverness of these borrowings lies not only in the transformation of the two pairs of figures, but in the association where none previously existed. Both pairs of subjects have been ‘de-pastoralised’ and resituated indoors, creating a domestic intimacy. The rock associated with the two girls in the ‘Renauld endormi’ tapestry becomes the curtain in the screen panel - the sense of intrigue heightened by the addition. The two girls behind the curtain seem to look right, the boy with the chaplet seems to look left, with the two figure groups communicating across the panels. There is a two-way sense of voyeurism: the girls in semi-undress are looked at by the boy, while equally the girls are looking over at an intimate moment between the boy and girl in a scene with implicit erotic undertones. The voyeurism, the revealing and the concealing of what should not be seen on either side of the panels (undressing in one, flute lesson giving in the other) could not have been better adapted than for a screen. This and the very high quality of the weaving suggests that it may have been conceived as a special commission.

While the tapestry panels are original to the frame, the 18th century slide down screen fitment has been blocked and the panels are now mounted and pinned-in from the back. The inner moulding on the tapestry-side of the panels is also a later addition. The double-screen has two high quality brass three-way hinges. The relation between the hinges, the carved ornament, and the fit of the parts, creates a beautiful, unified, join.

The feet are later replacements, as indicated by the ungainly join, as well as a lack of quality and decorative cohesion in the carved detail. The fact that the screen has lost its original feet casts some doubt upon what type of screen the piece originally was. If the original feet had been considerably higher than the replacements, then its function may have been as a dressing screen - something strongly suggested by the iconography of the tapestry panels.