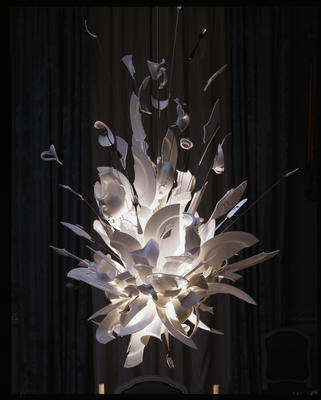 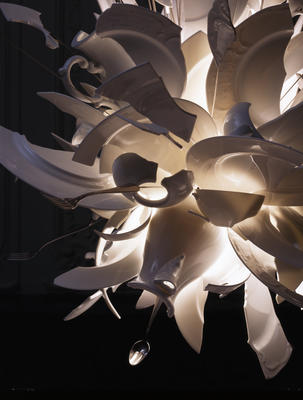 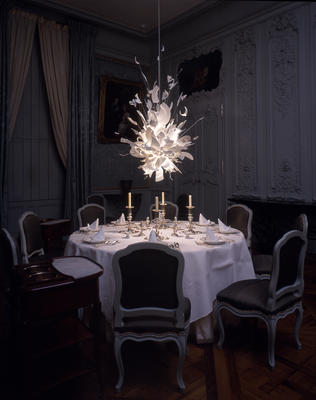 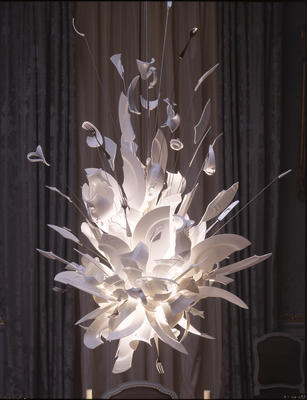 This chandelier is made of broken porcelain and cutlery and was commissioned for the Blue Dining Room in 2003. Its energy and irreverence make it particularly popular with visitors. Its appearance is the result of both accident and design. Maurer and his manufacturing team dropped the ceramics on the floor or smashed them with a hammer, further broke or smoothed some pieces, and then arranged and mounted them, with cutlery, onto the metal armature and light source.

Maurer's "Porca Miseria" hanging lights - of which only around 10 are produced each year - originated in a 1990 commission to design light sculptures for the Villa Wacker, on Lake Constance, in Germany, a late 19th-century house with interiors by the leading Jugendstil designer, Peter Behrens (1868-1940).

Maurer honed the design and exhibited a more complex version at a lighting exhibition in Milan in 1994, which he called "Zabriskie Point" in homage to the house exploding in slow motion in Michelangelo Antonioni's 1970 film of the same name. When one Italian visitor saw the suspended explosion of porcelain shards and cutlery, he explained 'Porca miseria!', a colloquial phrase meaning something like 'O, my goodness!'' and Maurer adopted this as the title.

Ingo Maurer trained as a typographer and graphic artist in his native Germany, worked as a graphic designer in the United States and, after returning to Europe in 1963, has established himself as one of the world's most innovative and exciting lighting designers, describing the light bulb as the 'perfect union of technology and poetry'.