Our grounds are now open Wed-Sun. All visitors must pre-book their visit.

(Book of caricatures both good and bad) 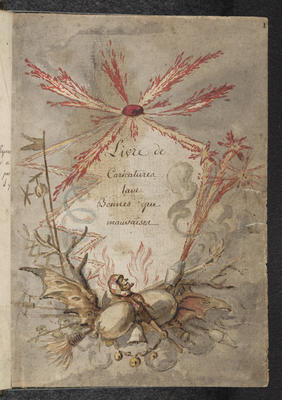 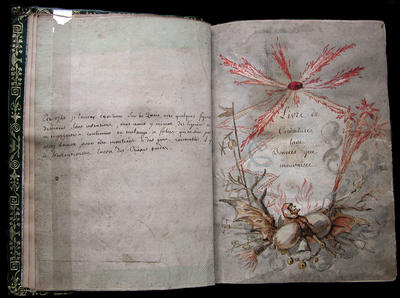 c 1775 {Composed as book was being completed}

One of a set, see others ▸

The title of the book, written over five lines, is centred on the page. It is contained in a blank, irregularly shaped space framed at the top by an exploding firework, a red pellet that shoots out arms of fire in all directions. The pellet has the shape of an ecclesiastical skullcap, or "calotte". One arm zigzags down the left side of the page, striking an antler at the bottom. The contours of its jagged line form the left outline of the cartouche containing the title. The antler struck by the bolt is one of a number of objects collected at the bottom of the page, framing the cartouche from below. Central among them is a smiling marotte, shown in right profile. It wears a motley cap and lies across two inflated bladders. A bell hangs beneath it. This bell is in turn framed from below by a chain of small sleigh bells. Flames rise from around the marotte into the reserve containing the title above. To the left of the marotte and bladders, alongside the antler struck by the flaming bolt, there is a broom, a toy windmill on a stick and a wing (possibly a bat's) with an eye-like motif. There is also an unidentified object composed of two zigzagging stems that cross over one another. Rising free of the objects is a pinwheel on a stick, a pennant on a long stem, and a blue-grey curl of smoke. To the right of the marotte and bladders is the plunger end of a piston syringe and a firework on a stick, both of which are partly covered by a second wing. Above the wing is another antler and a flaming torch, from which rises a cloud of smoke, drifting into the white space of the cartouche. A roman candle clustered among the objects shoots out red and yellow flames ending in stars and these define the outer-right edge of the central cartouche.

The whole central group appears to rest on grey clouds. Outside the confines of the cartouche, the page is covered in a thin grey wash.

Book of caricatures both good and bad