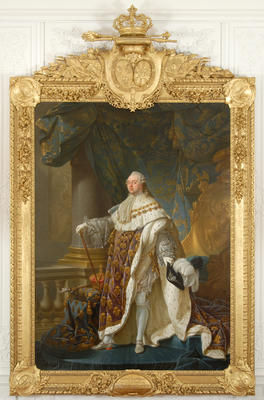 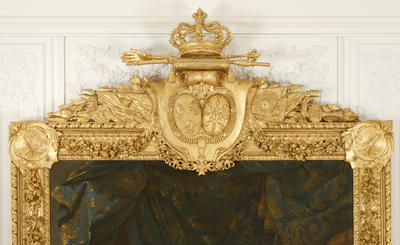 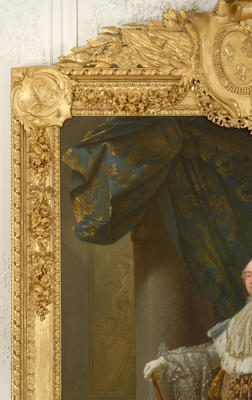 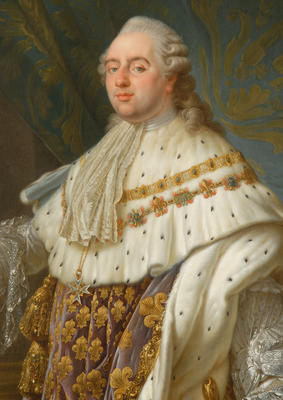 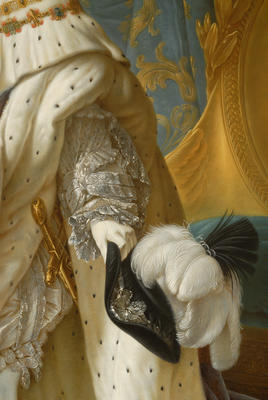 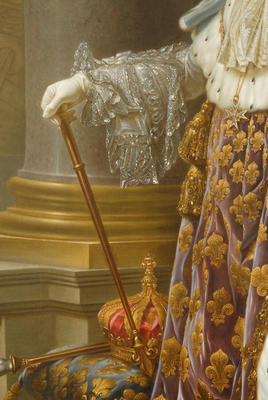 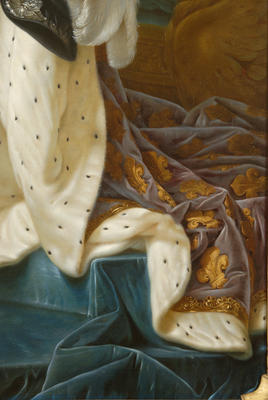 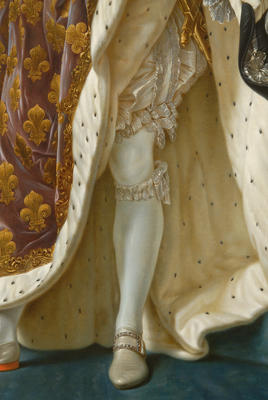 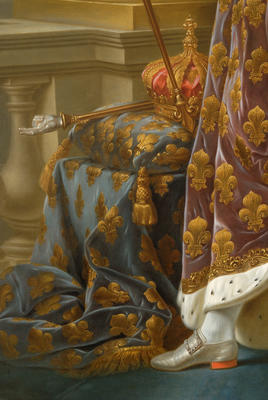 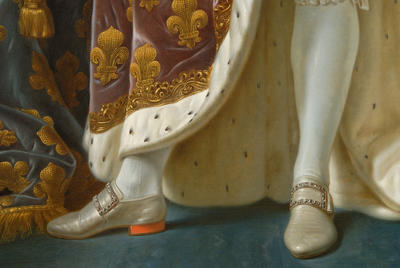 Callet's portrait of the French king Louis XVI was sent to London with Jean-Baltazar, comte d'Adhemar, the French ambassador following the end of the American War of Independence in 1783.

The ambassador's residence, in Piccadilly, was a showcase for French luxury arts, including Sèvres porcelain, Gobelins tapestries and Boulle furniture. Callet's portrait hung in the throne room, where all official business was conducted. It was not just an image of the king but embodied his virtual presence. The ambassador was the representative of the monarch, the human symbol of royal authority. The portrait and the throne that was placed in front of it were a manifestation of power.

This painting is one of at least 15 repetitions of Callet's portrait of the king commissioned by the French foreign minister, the comte de Vergennes, in 1779. Callet had begun work on the prime version of the portrait the year before. He modelled the composition on Hyacinthe Rigaud's celebrated 1701 portrait of Louis XIV (Musée du Louvre, Paris, INV. 7492). This iconographic continuity emphasised the five generations of unbroken royal lineage and bathed the weaker Louis XVI in the glory of his forebear.

The conventional trappings of baroque princely portraiture, such as the column and billowing canopy, imbue the painting with grandeur and add to the king's stature. The monarch is depicted as the sole source of justice in politically turbulent times. The Main de Justice (Hand of Justice) is prominent beside him and the figure of Justice and bundled fasces of Roman magistrates decorate the gilded throne behind him. He holds the sceptre of Henri IV (1589-1610), founder of the Bourbon dynasty, and wears the sword known as the Joyeuse, traditionally associated with Charlemagne (c. 747-842), with the chains of the two highest chivalric orders, from which the cross of the Saint-Esprit is suspended. Beneath his mantle of state, embroidered with fleurs-de-lys and lined with ermine, he wears court dress of Louis XIV’s era, including shoes with red heels (talons rouges), which could be worn only by the highest ranks of the aristocracy.

Unlike most other surviving examples of Callet's portrait, this one retains the neoclassical frame carved for it by Francois Buteux (1732-88). Buteux supplied several frames for versions of Callet's state portrait intended for French diplomatic missions abroad. The decoration of each one reflected the political relationship of the recipient nation with France at the time.

At the very top sits the crown of France, with the crossed Main de Justice and sceptre below. The shield is carved with the arms of France and Navarre, from which the Order of the Saint-Esprit is suspended. The trophy of arms with the flag of Louis XIV with its emblematic sunburst represents the might of France. The arms are lowered, laid aside in peace. This emphasis on peaceful rapprochement was important. The ensemble of painting and frame was made for display in London in 1783, when France wanted to restore good relations with Britain following the American War of Independence, in which France had supported the newly emerging nation.

Given by the King to the Count d'Adhèmar, his ambassdor extraordinaire to His Royal Highness of Great Britain, in the year 1783