This basil pot has been on display since 1997 in Waddesdon’s Smoking Room, on loan from the Rothschild family, but has now been given to the National Trust through the Acceptance in Lieu Scheme, making its home here permanent. It was made in Manises, near Valencia in Spain between 1440 and 1470 from tin-glazed earthenware. It is an exceptionally rare survival, one of only three known of this form in the world.

The basil pot or alfabeguer (from the Arabic word for sweet basil al-‘habac) is thought to originate from perfume-burners of the Almohade period in the 12th century. They were used to grow aromatic herbs like sweet basil and marjoram so that the plants could perfume a room, and it is known from paintings and contemporary documents that they were often found in wealthy homes in Renaissance Europe.  The first record of a basil pot in an Italian domestic interiors is in Giovanni Boccaccio’s Decameron, in 1373, where one features in the story of Lorenzo and Isabella. This was later popularised in the famous poem by John Keats “Isabella or the Pot of Basil”, which describes how Isabella hides the head of her murdered lover in such a pot. Basil pots are also depicted in 15th-century paintings, for example Carpaccio’s Dream of St Ursula (Accademia, Venice) and Antonello’s St Jerome in his Study (National Gallery, London).

Often known now as “Hispano-Moresque”, the technique of tin-glazed and lustred earthenware pottery evolved in the Middle East and was introduced to southern Spain and Portugal by Moorish craftsmen from the early 8th century.  By the 15th century Valencia had become the most important centre in Europe for such wares. From the late 14th century until around 1520 there was a steady trade with Italy where there was strong demand for luxury goods including all kinds of lustred wares. These kind of objects were commissioned by an exclusive and wealthy clientele. 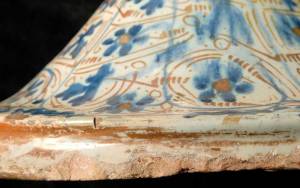 The distinctive stylised bryony floral motif (a floret of blue petals around a blue or lustred centre) and parsley-leaf decoration was also characteristic of Moorish potters in Manises and Paterna during the mid-15th century, and became widely fashionable, particularly around Florence. Pots of this kind, being expensive objects made to commission, are often decorated with heraldic crests or marks of ownership, although the armorials of a blue unicorn head on yellow ground in this case are not identified. They are thought to be the coat of arms of a Florentine family. 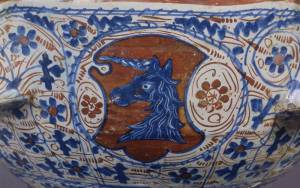 The basil pot has a strong historic connection with the Rothschild family and Waddesdon. It appears in 1903, when it was in Baron Edmond de Rothschild’s Smoking Room in his Paris house. Baron Edmond (1845-1934), from the French branch of the family, had inherited it from his father Baron James de Rothschild (1792-1868). On Edmond’s death in 1934 it was inherited by his son, James de Rothschild (1878-1957), and so came to Waddesdon. It was James who bequeathed Waddesdon to the National Trust, but the basil pot was not included in the bequest. It descended through the family until 1997 when it returned to the Manor. It has recently been given to the National Trust through the Acceptance in Lieu Scheme, and remains the centrepiece of the Smoking Room created by Baron Ferdinand de Rothschild, which in the 19th century housed his “Renaissance Museum”, including several important pieces of tin-glazed earthenware alongside many other treasures from 16th and 17th-century Europe.

Read more about the object in our online collection here >

Read more about acceptance in lieu >