Waddesdon Manor is the only place in the world where you can see three ship vases. This Christmas, inspired by the carol ‘I saw three ships’, we have displayed them together for a special display in the White Drawing Room.

The model – in the shape of a masted ship – is arguably the most famous vase made by the Sèvres manufactory, and was copied by several English and Continental factories in the nineteenth century. The extensive openwork and piercing of the sails and rigging on the cover and the round, porthole-like openings on the shoulder, are evidence that it was used to contain a pot-pourri mixture of dried flowers, herbs and spices. Twelve were made between 1757 and 1764, although only ten are known to survive today (of which Waddesdon owns three!).

Given the difficulty of firing soft-paste porcelain successfully in the kiln, the cover is an extraordinary feat of technical achievement. The vase also demonstrates the very fine sculptural detail characteristic of the manufactory’s production – even the twist of the rope in the rigging can be seen.

At both ends there is a mask with flowing hair surmounted by bulrushes. These indicate the association with water and, therefore, that the mask is that of a marine creature, despite its resemblance to a lion. The shape of the vase relates to the ‘nef’, a ceremonial container made to hold the king’s napkin, cutlery and spices, which was placed on the table when he dined in public.

The difficulty and expense of producing such a sculptural object meant that the model was one of the most expensive vases sold by Sèvres. Despite the fleurs-de-lis in gilding that decorate the pennant on all the examples, these were not objects intended exclusively for the king and royal family, and several were purchased by important members of the French court. Madame de Pompadour bought two (one in the Louvre, Paris, the other in the British Royal Collection) and another was bought by the prince de Condé (now in the Metropolitan Museum of Art, New York). 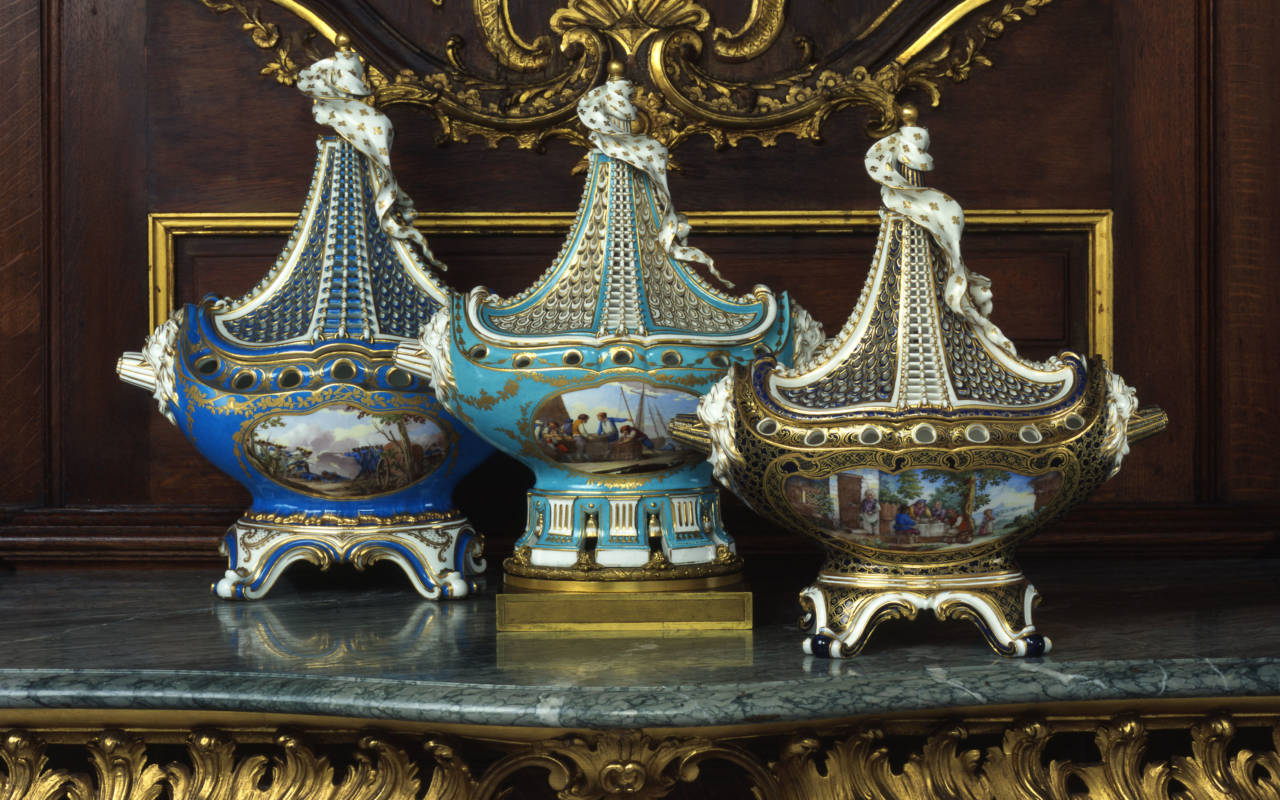 Other examples are in the Wallace Collection, the J. Paul Getty Museum, the Frick Collection and the Baltimore Museum of Art. Some of our guides have made special pilgrimages to see all ten, and Dr Mia Jackson, Curator of Decorative Arts at Waddesdon, has seen nine – only Baltimore remains!

Outside, you can also see an archway inspired by the three Sévres porcelain ship vases. Designed by artist Anna Whetstone, this installation is made up of ‘fish’ and ‘plankton’ decorated by 1,500 children at Summer Fest, and marks the start of our schools Christmas lantern display. Anna says that ‘as an artist and designer I was blown away by the intricate details of the unique vases, and the technical skill involved in producing such pieces in the 18th century’.

By Dr Mia Jackson, Curator of Decorative Arts at Waddesdon