The Guildhall School of Music & Drama student production artists have been commissioned to create a series of installations, inspired by Waddesdon’s collections. Here, they talk us through their progress a few weeks in…

Nicholas Wong, Year 2 Video Design for Live Performance
This week Dan Shorten, Head of Production for Guildhall Live Events, talked us through our first draft of the light show.

He suggested that the first section of the piece did not quite fit with the rest of the show aesthetically, as while the majority of the show uses images from the collection to create Christmassy scenes, the opening effect had more of a ‘sci-fi’ feel to it.

Consequently, we decided to change the design but keep the animation, and after several hours browsing through images of Waddesdon’s collection I came across a beautiful stamped, gilded pattern taken from one of the book covers. 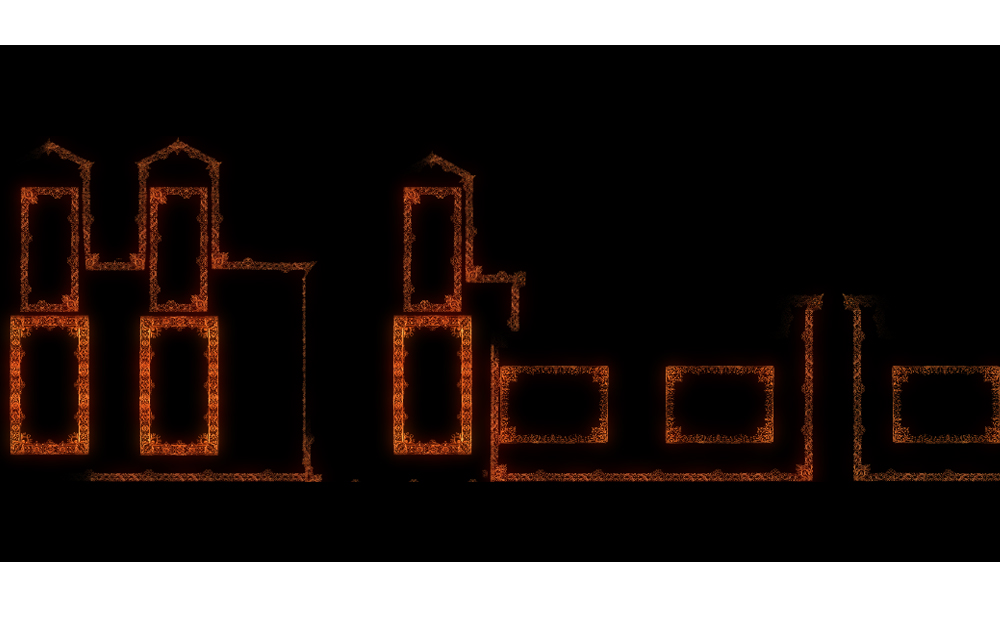 I subsequently used Adobe Photoshop to create a template of the building covered in the pattern, before using the Track Matte function in Adobe After Effects to trace the template of the animation. With this function, I was able to combine the new gilt design with the original animation, resulting in an opening sequence that better fits the show’s aesthetic.

Having sent out a draft timeline of the projection at the end of last week, we’ve just received our first ‘outsider’ feedback on the animation. Having this fresh set of eyes makes the project even more exciting, as it’s challenged us to come up with more innovative ideas. 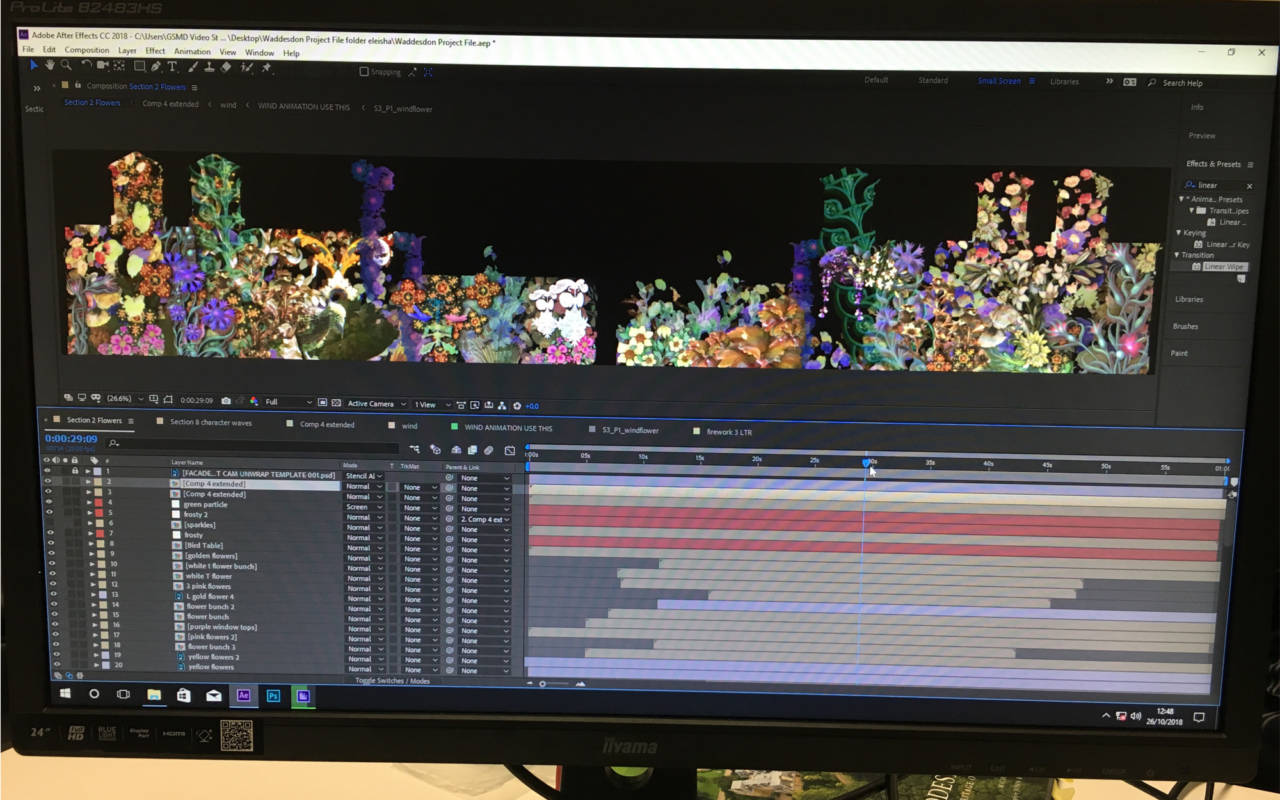 This week, for the first time, we also met the electronic musicians who will be working on the soundscape. Seeing all the separate parts of the production come together is so encouraging, and I’m more excited than ever about the end result.
Knowing there’s just over a week until we go on-site makes it feel so real!

Nina Thoene, Year 2 Video Design for Live Performance
After receiving feedback on the draft copy of our projection design, our aim now is to apply any changes and generally tidy the whole piece up. Aspects that need to be edited were picked up that hadn’t been noticed before, such as characters ‘popping’ off screen and the slightly incorrect size and scale of the building, which was a massive help. 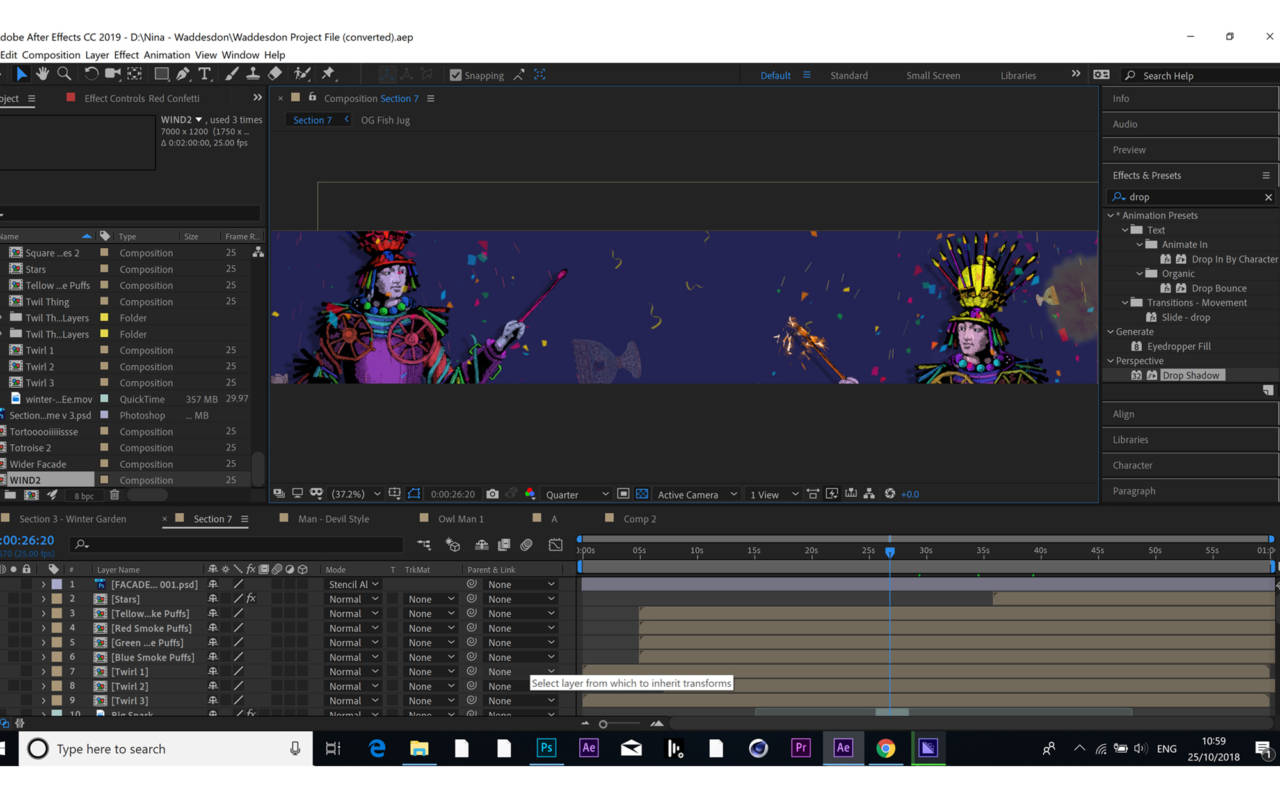 In order to make these edits I’ve had to create a new composition, in which the gap in the middle of the building is much larger. I hadn’t known how to do this before, and have therefore learnt a lot through this process. Alongside adding a few items and characters into the piece I’ve also added in more drop shadows, to create more depth.

Overall, this week has gone well, and I believe we’re on track for the finished product to be rendered out in the very near future.

Eleanor Coxall, Year 3 Theatre Technology
We have had a busy week here at the Guildhall School of Music & Drama, with all of the equipment arriving to be prepped. This included 2.5km of cable, and we repurposed an old video rack to create for our ampliﬁers and systems that will be used to run the audio trail. 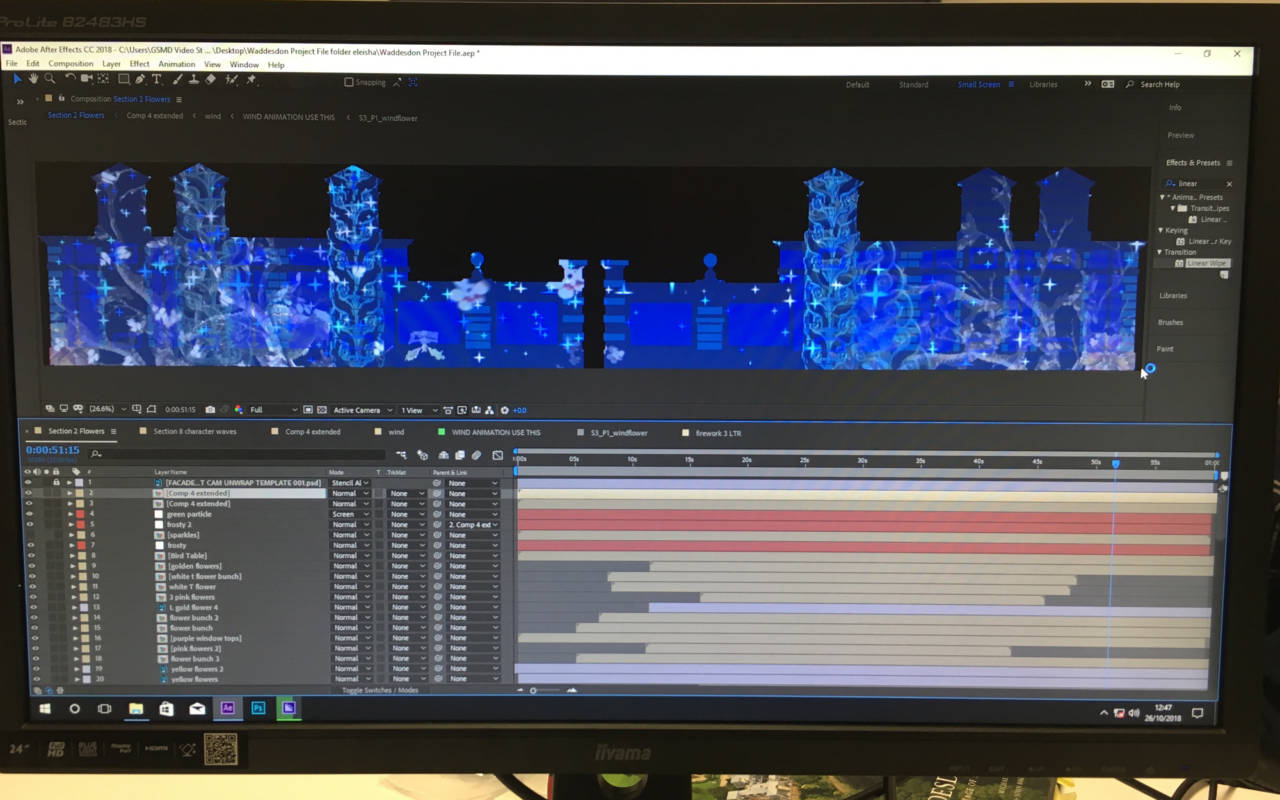 I have also been testing all of the soundscapes using a mock-up of the statues that will be used in the real thing. I had some concerns that these enclosures would aﬀect the sound, so we’ve made the bases as speaker-friendly as possible. Wood is naturally resonant, and we’re putting a grill on the front to ensure it isn’t just a big echoing box.
When testing it the sounds were slightly muﬄed, but I’m confident that with some editing I can correct that.
I am really looking forward to getting on site next week and starting to see this project all come together after months of work.