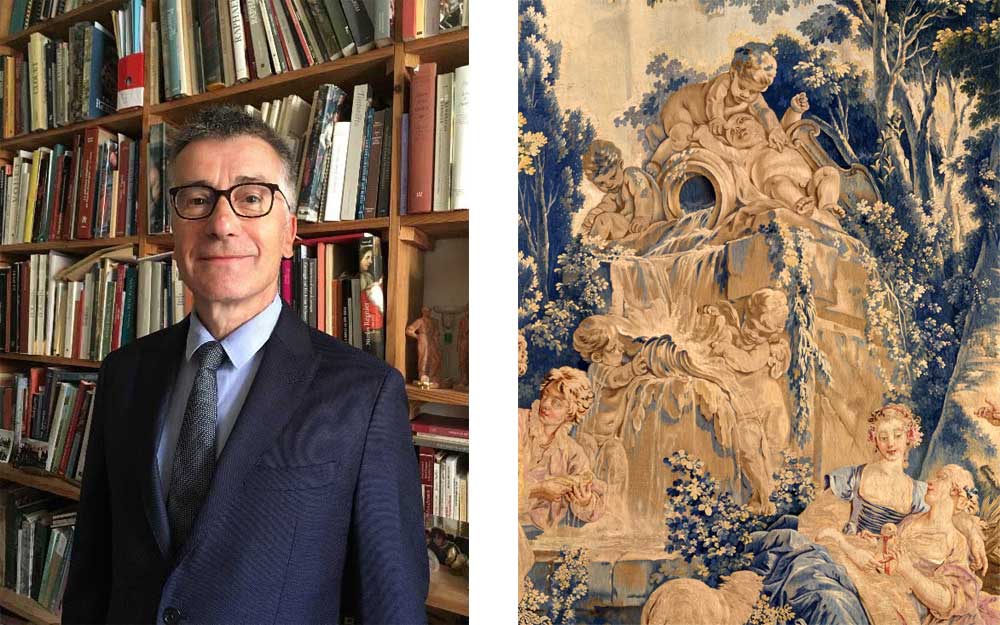 The fellowship supports innovative scholarship in the history of art, collecting and conservation, using the collection and resources of both institutions. It offers the selected art historian, museum professional or conservator the opportunity to research and study at both the Getty in Los Angeles and Waddesdon Manor in Buckinghamshire, England.

Dr. Bertrand is currently Professor of Art History at the Université Bordeaux Montaigne in Pessac, France. His primary areas of research include the history of European tapestries (14th to 21st centuries), as well as the history of furniture and the decorative arts in general. Bertrand served as scientific and executive manager of ARACHNE, a research project funded by the Agence Nationale de la Recherche (ANR) in France that contextualized the study of tapestries within the larger history of artistic creation. The project brought together dozens of international researchers and resulted in the development of a database that aggregates important information about the makers, families, and professional networks that played a role in the production of tapestries.

During his fellowship, Bertrand will work with Getty Museum curator Charissa Bremer-David on a digital humanities project related to the 18th-century pay registers of the Beauvais tapestry manufactory, one of France’s most important tapestry workshops. The registers cover the production of over 2,320 tapestries, which have already been digitized and will become part of an open content resource that makes the materials freely available online. The project intersects with the Beauvais tapestry holdings at both Waddesdon Manor, which owns 37 pieces, and the J. Paul Getty Museum, which owns 16. Bertrand also expects to utilize the dealer archives and photo study collection of the Getty Research Institute and draw on the Getty Vocabularies for the project’s data formatting. The completed resource should significantly advance many fields of research, from art history and provenance studies to social history and pre-industrial economics.

Bertrand says that his selection for the fellowship is “an outstanding opportunity to explore a unique archival source and rethink the history of 18th century French tapestry production.”

The selection process for the Getty Rothschild fellowship considers a number of criteria, including whether the applicant’s work would benefit from proximity to the collections and resources of the Getty and the Rothschild Foundation. Fellowships are for up to eight months, with the time split equally between the Getty and Waddesdon Manor. Fellows also receive a stipend during their time at both locations. The fellowship is administered by the Getty Foundation.

Past recipients of the fellowship include Dr. David Saunders, Dr. Thomas P. Campbell, and Dr. Tessa Murdoch.
In 2014, Lord Jacob Rothschild received the Getty Medal for his contributions to the practice, understanding, and support of the arts.

The Getty Foundation fulfills the philanthropic mission of the Getty Trust by supporting individuals and institutions committed to advancing the greater understanding and preservation of the visual arts in Los Angeles and throughout the world. Through strategic grant initiatives, the Foundation strengthens art history as a global discipline, promotes the interdisciplinary practice of conservation, increases access to museum and archival collections, and develops current and future leaders in the visual arts. It carries out its work in collaboration with the other Getty Programs to ensure that they individually and collectively achieve maximum effect.

Additional information is available at www.getty.edu/foundation

Additional information is available at www.rothschildfoundation.org.uk