Behind the scenes Gardens

Changes in the gardens

Despite the Grade 1 listing of Waddesdon’s landscape, the gardeners occasionally have to make bold decisions to protect the historic gardens for future generations. One such programme is now underway, with firm intervention taking place on the surface. The gardens team talk us through the changes visitors may notice.

Restorative pruning of the Portuguese laurels
Approximately 20 years ago, Portuguese laurels were planted on the upper terrace as a modern replacement for the Bay trees that can be seen in early photographs of Waddesdon. However, these are now in need some hard pruning to re-establish a more authentic match to those originals. 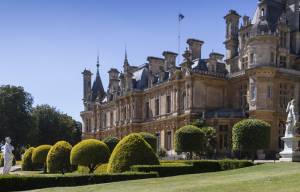 Box plants on Box View
At a similar time to the planting of the Portuguese laurels, Box View (an area at the west end of the house) was cut back to stumps as the box had become so overgrown. Gaps were filled with new plants and a perimeter hedge was planted to formalize the area, hiding a historic wall. Today, quite extreme action is being taken in this area once again to prevent widespread disruption from the Boxtree caterpillar pest (Cydalima perspectilis).

Boxtree caterpillar look very similar to that of the cabbage white butterfly and feeds just as voraciously. In order to control this pest, Waddesdon’s gardeners have decided to heavily prune the plants back, opening up the space and allowing birds to feed on any remaining larvae. All the prunings have been transported to a composting area nearby.

This hard pruning also has a rejuvenative effect, as the plants will grow back in a compact and neat form, similar to the way they would have looked when originally planted.

Changes to the Yew
An extensive restoration of the hedges and topiaries around the Manor was undertaken between 1990 – 2002. The green and gold yew hedges below the Parterre retaining wall were cut back to stumps, as they were so overgrown they had fused together with the topiaries to become an unrecognisable mound. Following much pruning and shaping the hedges and topiaries slowly re-emerged, but once again, some twenty years later, they require more remedial ‘surgery’.

Phase 1 of the pruning began in 2020, and involved the team of gardeners learning to operate a topographical laser-guided level. As part of phase 2, the gardens team hope to make the hedging tighter and even firmer by encouraging regrowth from each pruning cut. This will also add more drama to the gardens by further emphasizing the two different types of yew that border the parterre.

Many thanks to gardeners Pete Thorpe, Peter Turski and Mike Buffin for their help with this blog post.