Bringing the outside in: The Conservatory at Waddesdon

Baron Ferdinand de Rothschild had a keen interest in gardens, and the grounds he created at Waddesdon with the help of landscape architect Elie Lainé, were much commented on for their magnificence and colour at the time.

The Gardener’s Chronicle magazine stated in December 1898 that not only did Baron Ferdinand ‘like plants but …[he] had acquired a considerable knowledge of them – a trait which is characteristic of all the Rothschilds’. This was particularly true of Miss Alice, Ferdinand’s sister, who created a house and garden at Eythrope, her adjoining estate.

At Eythrope, the park and garden encompassed 60 acres including a rose garden, Dutch and Mexican gardens, a wild garden and a four-acre walled kitchen garden with several large glasshouses. In 1898 Edward Hamilton, Gladstone’s secretary, wrote that Eythrope ‘is the most magnificent horticultural toy seen anywhere. [Miss Alice] has consummate good taste and great knowledge of plants and flowers.’
On her brother’s death in late 1898, Miss Alice inherited Waddesdon. She also had homes in London and in the south of France, so when she was not at the Manor, she would write to her head gardener, George Frederick Johnson, to discuss garden matters and send instructions about which plants and vegetables to grow and what she wanted for her kitchen as well as recommending specific techniques and fertilizers. Much of this correspondence survives in the Archive, and is a wonderful source of information about turn-of-the-century gardening practice. Johnson also recorded Miss Alice’s suggestions about what she wanted indoors at the Manor, whether arrangements of cut flowers or planting schemes for the Conservatory. A note from 1906, for example, tells us that plants included ‘Hydrangea hortensis’ in marble jardiniere nicely furnished with ‘Panicum variegatus’ and ‘Isolepsis gracilis’ and ‘Tradescantia verida’. The other pockets in the conservatory to be nicely and tastefully arranged with ‘Coleus selectea’, French varieties’.

These historic documents have inspired some of the planting schemes at Waddesdon today. This season’s arrangement in the Conservatory incorporates a range of foliage and flowering plants such as ferns, marantas and begonias. We have used streptocarpus, gardenias, jasmine, and anthuriums, a display that produced a gold medal for Johnson at the RHS Chelsea Flower Show – one of two that he won, in 1928 and in 1935. Some plants will be changed throughout the growing season to provide accents and so that we can introduce unusual specimens grown by the gardens team, such as the flame or glory lily, Gloriosa superba ‘Rothschildiana’, a selection of various carnivorous plants, and Victorian pelargoniums and geraniums. Miss Alice would have been proud! 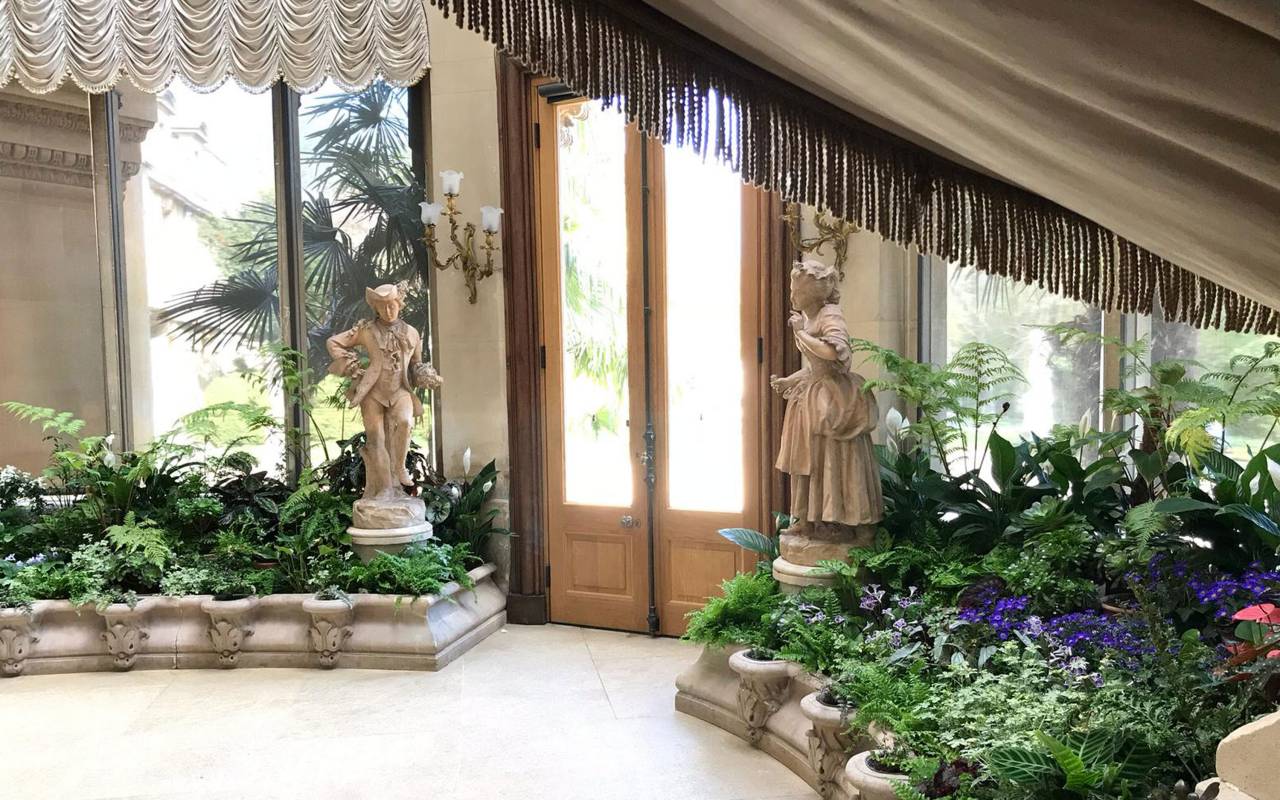 A year in the garden

From the stark beauty of winter to the vibrant colours of summer.

Read our month by month guide

Art in the garden

Discover art in our garden